Meet the Others: Chad Rea

Drawing upon his emotional response to current events, and utilizing communication techniques mastered as an advertising copywriter, Chad Rea explores the duality of self and our attempts to understand our changing world. 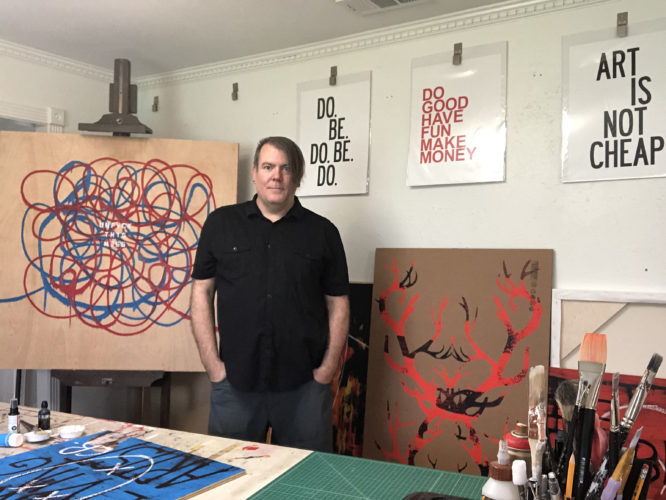 It took me over 30 years to reclaim the artist title, but I’d like to think that I was only trying on other titles to see which fit best. And most of the others fit like a cheap, ill-fitting suit. When I was 16, I wanted to work in the creative department of an ad agency. I liked art and writing, and that seemed like the safest option to make stuff all day and get paid. So, I did that for a successful rollercoaster ride until I got burned out and decided to teach creativity at UT, advise startups on branding, and lend my voice to the occasional commercial. And, even though I’ve been an artist my entire life, it wasn’t until two years and some spiritual growth ago that I decided to make a serious go at embracing my authentic self as an artist. And I use that term in the broadest way possible. It’s what I spend nearly every waking hour making. Here, I sell original paintings and prints.

I’m primarily drawn to political, ethical, and social issues, the struggle to understand this changing world, and the duality of self. No, really, I’m hilarious in person. Which might be why I gravitate towards bold and bright primary colors and clever wording. They become a contrast or juxtaposition to the deeper meaning. It’s also an old advertising trick, a form of subversion or bait ’n switch, if you will, that ultimately leads the viewer to a more unexpected emotional response when they discover the title or meaning behind the work. But then, somewhere in the process, the bold and bright primary colors feel too happy to me, and I need to fuck it up somehow — like with black spray paint, drippy graffiti markers, or sandpaper. By doing this, a part of me is also celebrating my limitations and letting go of perfect. 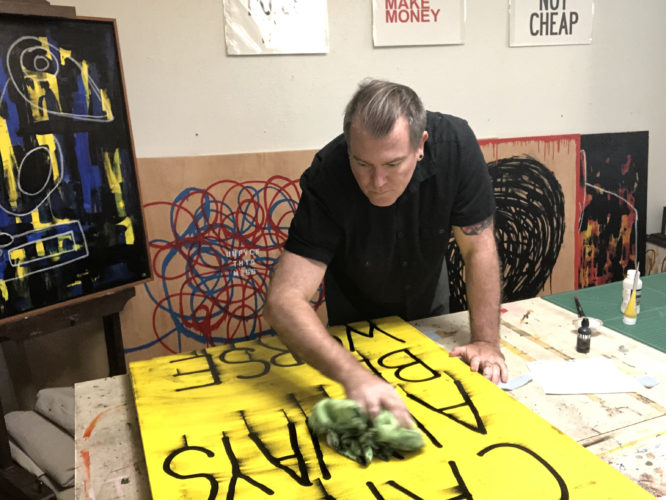 I’ve made a lot of things in my lifetime. I mean, A LOT. Very few were made with paint. As a kid, I used my hands a lot, thanks to my crafty grandparents. Then I went to college and never stopped working with my brain. My hands were missed. I never felt like I could draw well and I liked the idea of painting with my hands, so I started there. Now I drag brushes, putty knives, and rags over a canvas or discarded pieces of plywood. It’s fluid and frantic and repetitive and therapeutic. When I develop ideas on the computer, for example, nothing is second nature and the technology can’t keep up with my monkey brain. It’s only rewarding when I’ve reached my destination. Painting, however, is about the journey.

When I first started warming up to the idea of calling myself an artist, I used to rely on other artists to take my thoughts and words and interpret them. In other words, a collaboration much like they do in the creative department within an ad agency or a film studio. Then I started getting more comfortable with the fact that I would never be able to design or paint as good as my peers, and that I might as well just get on with being me. That means constantly changing it up as I keep one foot outside my comfort zone. I actually prefer the autonomy and having to learn new skills along the way. Right now, however, I’m gravitating toward more conceptual sculpture work, but only because it scares me a little. But, unlike painting, I have to rely on others to help execute my vision in the same way artists like Warhol, Koons, or Holzer do. And sometimes, that makes me feel less of an artist even though that’s total bullshit.

I’m inspired by current events and my personal need to experiment and evolve. A career in the dark arts of advertising and persuasion taught me a few things about process, including how to concept and execute in high volumes before yesterday. As an independent artist, I don’t have to be creative-on-demand, juggle unreasonable deadlines, or have anyone fucking with my vision. With some of my more conceptual work, I like to start with what I want to say, to whom, and then figure out how to say it for maximum impact. The medium is the message. Other times, I don’t want to think. I just want to be a child and push paint around until something emerges and then make sense of it. Kinda like looking up to the sky and finding faces and animals in the clouds. Sometimes I gravitate towards a color palette, an object I’ve found, or just something I want to try — like, “What if I attempt that last series of faces but with only six strokes?” Or, “What if I vandalized a work of mine that I love with graffiti?” While I’m always thinking up new ideas, I typically execute 2-4 works at a time and obsess on them until I’m finished. And even then I might paint over it two days later and start over. I know I’m finished when I’d show it to someone else.

My main focus is a solo show that I’m hoping still opens in October and runs up to the election. It’s titled “The #Vote Show” and, well, you know, it’s about getting people to think about where we’ve been culturally the last 4 years and take action. Lots of metaphorical sculpture work, which I haven’t done a lot of since my show on American gun culture but really enjoy. Of course, I’ve also been exploring my nonsensical side with totally fun paintings based on my silly shower thoughts, other people who share my first and last name, as well as some trippy visions I experienced during ketamine assisted therapy. They look nothing like any of my previous work, but then, that’s the point.

About 20 years ago, when I was living in Dallas, I painted two large abstract paintings on raw canvas. They were the only two paintings I’d made in my adult life at the time. Despite thinking one of them sucked, both managed to get rolled up into a tube and shipped with me to London, Amsterdam, Los Angeles, Portland, and finally to Austin where for the first time, I had a house with the wall space to hang it. This was in 2016. I was trying to figure out the best place to display it and posted a photo on Instagram for some crowd-sourcing. An artist friend commented, “Did you paint that?” I replied, “I did.” He then offered the best advice I’ve ever received as an artist. “You should paint more.” The next day I bought a bunch of paint and canvas. 172 days later, I had painted over 100 visceral reactions to the news surrounding the Presidential Election. Once again, I took to Instagram to post the first painting in that series. Someone took notice and invited me to have my first solo show during SXSW titled “Upon Hearing The #News”. So, yeah, I guess you say I haven’t stopped painting since. Good advice. I highly recommend it.

Shop artwork by Chad and other trailblazing artists at The Other Art Fair’s Online Studios. 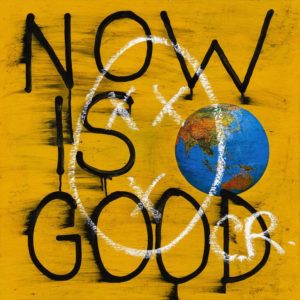 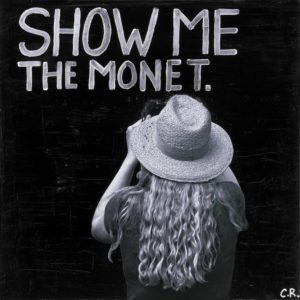 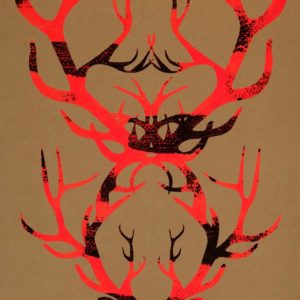