Polina Novozhenets is a self-taught artist whose projects focus primarily on abstract representations of entanglement. Her pieces range from vivid three-dimensional paintings of knotted ribbons to flattened, minimalist silhouettes. 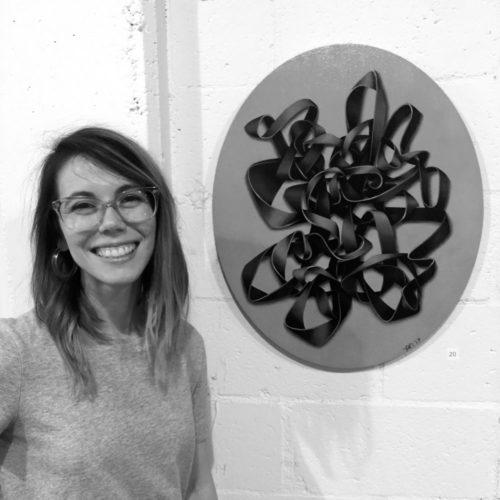 Polina was born in Belarus and spent most of her life in New York State after immigrating to the US as a child. She moved to Austin in 2011 and has been painting professionally since 2014.

Tell us about who you are and what you do.  What is your background?

I am a self-taught artist with roots in the former Soviet Union, New York State, and, presently, Austin, Texas. I was born in Belarus in the mid-eighties and spent most of my life in western New York after immigrating to the US as a child. I grew up in a family that had practiced DIY by necessity, so I learned to sew and knit and hammer and mend early on, and, like many makers, I wholeheartedly adopted an ethos of creating for myself whatever it was I wanted or needed.

I had other academic interests, so I only really began to build an art practice after finishing graduate school. I slowly taught myself to work with a variety of different mediums, and a couple of years in, I had the opportunity to focus on creating a body of work for a small solo show. After that, I started making art professionally, and I haven’t looked back.

The obvious answer is entanglement, which, given my focus on images of knotted and tangled up ribbons, is what most clearly defines my work. But what I mean to represent is something almost synesthetic. I want to capture the sensation of the knot in the stomach, an intractable-seeming problem in the mind, the unifying feeling of loving someone, the sense of freedom that comes with extracting yourself from a bad situation, all by way of color and composition. Of course I want the work to evoke a feeling, but I also want the work to look like that feeling, registering in the mind as its component shapes and colors.

Remember those acrylic prints I was drooling over a few months back? Well I got a photo a couple weeks ago from a collector who bought the very first custom-sized print showing where he’s hung it and let me tell you, there is nothing more gratifying than seeing something I’ve made looking so dashing in its new home 🤩. #knotart #knottheory #mathandart #mathart #knotpainting #ribbonpainting #ribbonart #knotart #acrylicart #acrylicpainting #abstractart #abstractpainting #abstractrealism #contemporaryart #fineart #austinartist #austinart #texasartist #opticalillusion

I work in many different mediums but not usually together in any single series. What repeats in my work is the knot motif I return to over and over again, and different mediums give each iteration of the motif its own unique effect. Working on canvas allows me to play with scale, and whittling down an infinite range of color options challenges me to find exactly the right tone and saturation for a piece since even the most subtle shifts can completely change its effect.

I also love working with metallic oil pastels on laser-cut birch board because it allows me to create the illusion of a suspended 3D metal sculpture out of a flat piece of wood. And as an obsessive technician, I like the challenge of using what are essentially crayons to create a sharp and precise work of art.

I do a lot of spiraling back in my work and I also make a lot of minor (usually technical) technical changes in each successive piece, which is just what art-making is, mostly. The perhaps strange comparison of art-making to scientific research really resonates with me, because, often, we’re making art without a template or instructions and so are left to experiment. We form a hypothesis, run the test, determine success or failure or something in between, and then run a new test with the next piece. My experiments are often about composition, scale, and color, but the most exciting moments come when I can translate my knot motif to a different medium and something new and magical happens. I recently started embroidering my knots onto clothing, and that process has opened a whole new language of expression that I’m very excited about.

My pieces take a long time to create for different reasons. One reason is that I’m currently raising a toddler, but mostly it’s related to the materials I use. For acrylic canvases, I usually mix a set of around ten colors that make the ribbon gradient, and to make that gradient smooth and the ribbon convincingly solid, it requires many sessions at the easel and many layers of paint. Doing the initial sketch is my favorite part of the process, and I often think and daydream about a composition for a long time before I put pencil to canvas. From there it can take anywhere from ten minutes to an hour to get the shape right. I then have to determine the action of the ribbon and the knot (and whether it’s even going to be a knot, and if so, where it will be knotted), which becomes apparent as I decide which lines to keep and which to erase.

Then I paint. I usually know exactly what the piece will look like from the outset, which some people might find creatively dissatisfying, but I actually find appealing. Even though I have a clear enough path to follow, the problem-solving along the way is engaging (deciding where to place highlights and shadows in accordance with a piece’s internal physical laws, for instance), and the act of painting is beautiful and therapeutic regardless. I get a bit obsessive towards the end and often require someone else (usually my husband) to convince me that a piece is finished and there isn’t a single thing more I could do to it that anyone would be able to perceive.

The wood cutouts are painted in the same way, but the design and assembly process is a bit more involved. I usually go digital here and design a piece on my iPad, then outsource to a laser-cutting studio in Austin to do the fabrication. The effort I would put into the background of a canvas piece goes into the front-end of this process instead.

Works in my flat series take the least amount of time to complete, and I love that these pieces can be a kind of visual palate cleanser for me as a color-loving painter. For viewers, I offer the series as a counterpoint to the three-dimensional ribbons—a sort of footprint that is the impression of something that was once there, but that now forms the image itself. 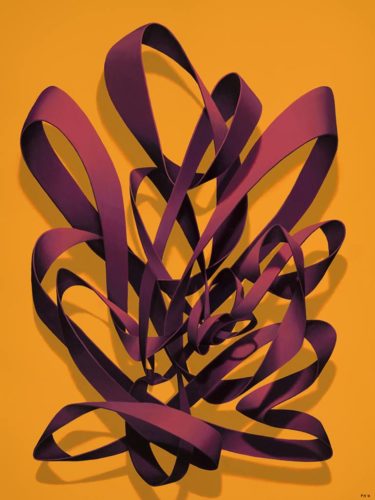 Magenta on Orange by Polina Novozhenets

I’ve recently become an embroidery fanatic. The first craft I ever learned as a child was knitting, and there is an obvious connection between the knots I paint and textile arts rooted in weaving and knot-making, so it makes sense to me that I’d eventually arrive back at textiles. Using embroidery to create images of knots, particularly on upcycled secondhand clothing, has such a beautiful, unifying logic to it, and I’m really excited to see where I can take it.

I return again and again to the book “Art and Fear” by David Bayles and Ted Orland, who remind me that all it really takes to be an artist is to make art, over and over again, and that most of it will probably be mediocre, because that’s math, but also it’s okay.  Some of it will be really good, and we need good art just as much as we need great art. So it’s important to keep making and making, and avoid quitting, because creating this piece is the only thing that can reveal to you what might come next, and that piece will lead to the next. Don’t break the chain, and it won’t break.

Shop artwork by Polina and other trailblazing artists at The Other Art Fair’s Online Studios. 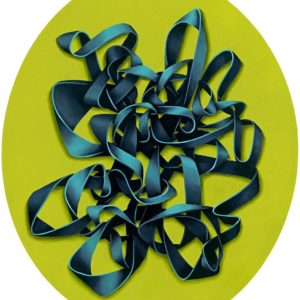 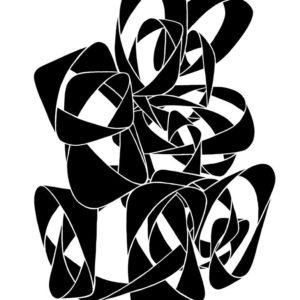 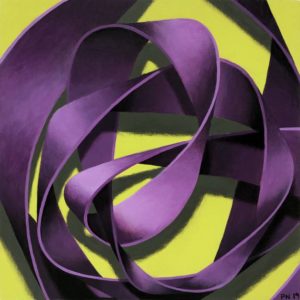