We noticed you combine elements of the past with the new in terms of your paintings – what inspired you to do this?
I’m interested in Benjamin’s theory of historical materialism, where the past is seen as ongoing and shifting in meaning, dependent on the position of the present. With this in mind I’ve been looking back at the various incarnations of utopias, one being the romantic landscapes of the 1800s, where the painters felt it their duty to capture the power and beauty of nature before an impending industrial apocalypse.

As a counterpoint to this I’ve always been drawn to the pioneering spirit of future civilizations depicted in early science fiction, where the protagonists are fleeing a ruined earth and trying to find new planets to inhabit.  Through the appropriation of these resonating ideologies I seek to create narratives that are pertinent to our perception of nature.

Favorite font?
I’m usually a big fan of serif fonts like Garamond, but recently have been using a sans called DIM, there’s also the classic Futura.

Where is your studio?
I’ve got two at the moment; I’m doing a part-time MA at Goldsmiths so I have studio in Deptford, where I spend at least two days a week. But my main studio is at home. I live in a small village and the studio is down at the end of my garden, I designed and built it myself, it’s an amazing space to work in and has definitely influenced my new work.

Tattoos?
None, but I’d love to have some crazy psychedelic Aztec designs done all over my torso, I don’t think my wife would let me though.

Succulents or Cigarettes?
Succulents, I think.

Ever have artists’ block?
All the time, at least once a year, it’s frustrating when it happens and you feel like you’re whole little world is crumbling down, but it usually gets rebuilt in a better way.

Everyone has a vice. Care to call yourself out?
There have been many over the years; at the moment it’s probably Belgium Beer.

What was the best advice given to you as an artist?
Someone told me once to just keep going and never stop.

What’s around the corner from your place?
Nothing much really; fields, some woods, not many people.

Prefer to work with music or in silence?
Music all the time, but it tends to be quite silent and still, anything by Stars of the Lid and Brian Eno–that sort of thing. When I’m in London I tend to stay with friends in Hackney and try get around as many exhibitions as I can, the last one I saw was the Pippilotti Rist and George Condo show at the Hayward. The rest of the week I organize and curate exhibitions at the Bonington Gallery in Nottingham.

Favorite contemporary artist?
Difficult question, there are so many, it would have to be a toss up between, Michael Borremans, Fred Tomaselli and James Turrell.

What would have been a typical doodle for you as child?
Airplanes, over and over again, and then monsters

If you could collaborate with anyone, living or dead, who would it be?
My favourite author is Jorge Luis Borges, so maybe something with him, a painting perhaps to illustrate a book cover.

Favorite sound?
I’m not really a petrol-head but I rode on the back of a motorbike for the first time recently, it was a Ducatti 900 and it sounded amazing.

Favorite music/band?
Tough question, but it has to be Radiohead

What do you wear while you work?
I used to have these Ghostbuster overalls, but they are so caked in paint now that you can’t move in them. I’ve got loads of tatty jeans that do the job instead.

Favorite surface to paint on?
Linen primed with homemade gesso, but I can’t stop it from cracking.

Use anything other than paint?
In the past I’ve dabbled in sound and video and recently collaborated with a digital embroiderer; I’m currently working on some laser engravings with someone.

Representational or Surreal?
Somewhere in the middle really

Photo references?
I like them to be lo-res, so that when I work from them there’s plenty of scope for the painterly processes to take over.

Is painting dead?
John Martin at Tate Britain, Gerhard Richter at Tate Modern, George Condo at the Hayward and Wilhelm Sasnal at the Whitechapel, all on right now in London. They all deal with physicality and history in painting, so no, Painting isn’t dead; it’s very much alive. 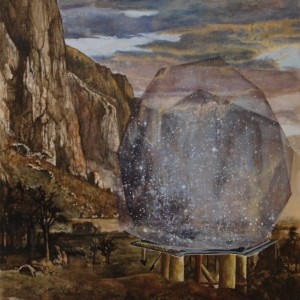 Adjacent - Nothing Inside Something 2,300 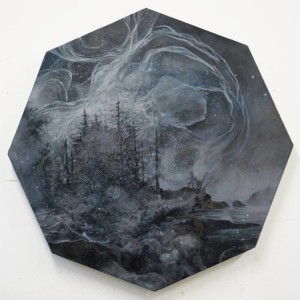 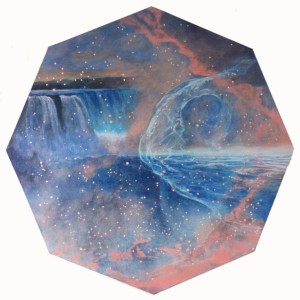 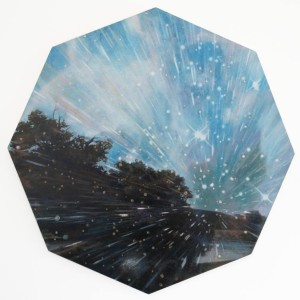 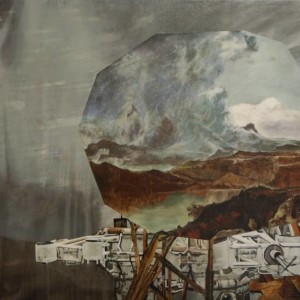