Meet The Others: Benjamin Thomas Taylor

The Game Changers. The Rule Breakers. The Innovators.
Discover some of the fantastic emerging talent showcasing their work at The Other Art Fair.

Bristol-based fair artist Benjamin Thomas Taylor creates playful juxtapositions within his work, resulting in what he describes as ‘romantic Pop Art’. Graduating from art school in 2006, Benjamin has since created artwork for private collectors from across the globe, for brands such as Nike, Atlantic Records and Rough Trade, and has even collaborated with musician Paolo Nutini on his 2014 album ‘Caustic Love’.

“I want my artwork to open up a sense of possibility within the viewer, like the excitement a child feels when walking into a sweet shop. I love ideas, and often feel as much an inventor as I do an artist. Like an alchemist turning lead into gold, the challenge is then translating these ideas into pieces of art, experimenting and refining, until something is created that people will enjoy looking at.”

I create artwork that opens up a sense of possibility within the viewer, like a child walking into a sweet shop. Growing up in the rural spaces of Snowdonia, but spending much of my adult life in London, My work is full of playful juxtapositions. Flat blocks of colour surround diagrams of numbers and lines, areas of text are embedded in landscapes and appropriated imagery is placed within original compositions. The end result is a kind of romantic Pop Art.

Making art makes life exciting, as you never know quite what’s going to happen next. I also think if I didn’t make art I’d be really bored.

When I was growing up, my grandmother used to live with us. She had her own living room where I would sit with her and watch old James Bond movies and eat ice cream. At the back of the room used to be to be an old, dark wooden table with two draws built in at either side. In one draw she kept placemats and a pack of candles that would only come out at Christmas.

The other draw, on the right hand side of the table, used to be filled with all sorts of wonderful bits of stationary and art materials. Paints, stickers, pencils, fluorescent markers, shiny paper…Every time she left the room, I’d run over to the draw, pull it open up and peer over the top, just about managing to see inside. I would stare at the contents of the draw, encapsulated by all that was in it. I remember the feeling it gave me, that urge to make something, to create something from all of its contents. That is when I knew I wanted to be an artist, and spend my life making art.

When did you first exhibit your work?

When I graduated from art school back in 2006 I moved to a live / work space in Hackney Wick. It was an old warehouse that had been divided up into lots of different spaces. I lived in a room with 5 other people. There wasn’t much privacy, and everyone would make their art at different times of the day, so it was never easy to get much sleep. There was a guy who lived down the corridor called ‘The Yellow Man’. He only wore yellow cloths, ate yellow foods and owned yellow objects. When I went round to his space everything was yellow, from the toilet to the kitchen cupboards. It was like his whole life was an art performance. He also threw some really great parties.

Creatively I found it a really liberating time…free from the shackles of art school. I know that sounds a bit weird, but it felt like I was finally making art in the really world, away form the education system. During this period I had lots of exhibitions and put on lots of exhibitions myself. Every few months I’d have an event I needed to put some work into. There were shows in squats, in proper galleries in the middle of Shoreditch and in studios and houses around Hackney. Once I put on an exhibition in my bedroom. At the private view, I had my favourite band at the time play a gig on my bed.

Being part of The Other Art Fair gets your work out there! Since the October Fair I’ve been so busy! As well as strong sales, I’m now working with Print Club London, producing exclusive limited edition screen prints of my work. On top of this I’m also working with Jamm Gallery, producing a whole new collection of Original Paintings for a show in May 2017.

What is your favourite piece?

My favourite piece on Saatchi Art is called ‘Reunited with Everything You Have Ever Lost’. The image took me over a year to complete. Whilst making it a lot was going on my life. My wife was pregnant with and then gave birth to our twin sons. I also lost my grandmother who I was very close to. The image seems to represents those polar opposites of emotion, and creating it became away of me dealing with both. 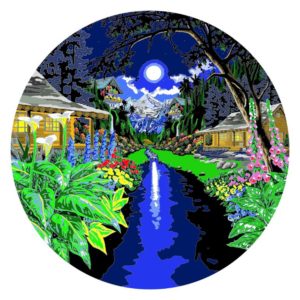 Reunited with Everything You Have Ever Lost 460