Adam Norgaard is an expat artist from the United States, currently living in Japan. Attracted to Japanese culture from a young age, he decided to relocate there soon after graduation his works reflects the process of adapting to a culture different from his own. Using oils as his main medium, Adam’s work ties in Japanese elements, remaining playful while also maintaining a finished quality.

Your style for these Van Goghs is very distinct. Whether dead or alive, they are very recognizable as yours. Can you tell me a bit about your style and the Japanese elements that went into these avatars and your work in general? 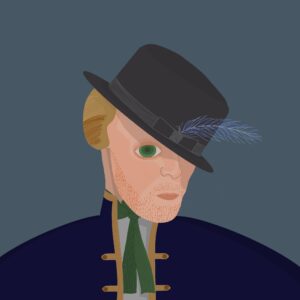 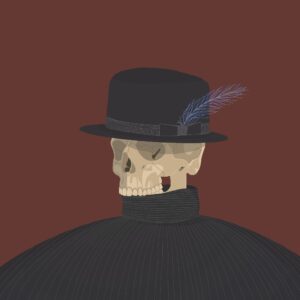 Well, I wanted to keep the background simple and crisp in order to have the focus on the subject. In this work I focused on the Japanese element called mono no aware, describes an awareness of transience and the impermanence of life. It’s all about finding beauty in the passing temporary moment and acts as a good reminder to be more present in our existence. For example, cherry blossoms that bloom and fall in only 2 weeks are a major symbol of mono no aware. Another example would be cicada’s because they live and die relatively quickly. In my case with the avatars, the dead version corresponds to this element.

Does anything in the aesthetic you chose speak with the Japanese mindset and philosophy as well?

It corresponds to ikigai. Ikigai is basically a zest for life, finding your purpose and reason for living. It absolutely did. I was thinking about Van Gogh’s commitment to painting. I remember hearing shortly before I began the project that he had a hat with candles attached to them for painting at night.

How did you approach the creation process?

For me I began with some research into his life while also tying in elements of Japanese culture. I also noticed he had one painting inspired by Ukiyo-e, so I thought there must be a link. It turned out he was an avid collector of Japanese woodblock prints. He wrote a quote “all my work is based to some extent on Japanese art” in one of his letters. He and his brother amassed hundreds of the ukiyo-e prints. They’re now housed at the Van Gogh Museum in Amsterdam.

Many artists have found kinship with Van Gogh during their work on this project, but that is a very specific and unique trait to have in common with him!
Can you tell us about how you started your career as an artist? Did art lead you to Japan or did Japan lead you to art?

I started my art education at the Academy of Art in San Francisco. Art absolutely led me to Japan. I did a homestay in high school and while it was an extremely difficult 6 months with the culture shock I experienced back then, I felt like I had only touched the surface of Japan. After my foundations courses at AAU I decided I needed to go back. I also began to forget Japanese when I began university and knew I had to use it or lose it. 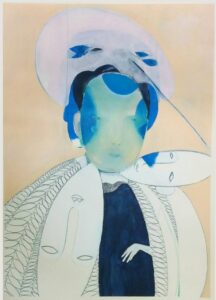 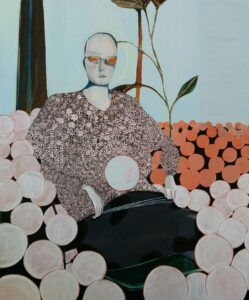 These two pieces I painted almost a year after coming to Japan. After integrating more into Japanese culture I was able to pickup on more of the cultural differences I hadn’t noticed. In particular I was noticing how, despite being able to speak Japanese and communicate, there’s a perpetual feeling of being alienated as a foreigner.

Japanese society is comprised of something called uchi-soto which means insiders-outsiders. It can be very insular at times and I wanted to communicate my initial feeling through those two pieces. With the piece on the right I referenced some masks – Japanese noh masks. I remember hearing in a course I took that they change their facial expressions depending on the angle you tilt them and that always stuck in my mind. It made me think that everything is subjective depending on how we view it.

What did you find the most difficult in your journey of integrating with Japanese culture? Do you think that there is ever a possibility of true assimilation or is it irrelevant?

I’d say that as an island nation there’s always been a very distinct identity. It’s incredibly difficult to assimilate. There are very strong preconceived notions about nationalities due to a lack of exposure to different cultures. I think as I talked about earlier, the uchi-soto dilemma makes it very difficult to go “in-group”

There are two different types of languages used. With “in-group” people you use casual language. But with outsiders and “out-of-group” individuals, you use polite language.

The language acts as a barrier, basically you use super polite language with strangers or elders. 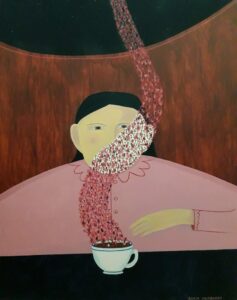 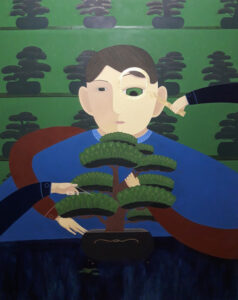 There is so much to learn about Japanese culture and I really appreciate the depth and meaning you put into your work and life. Before we close the interview, is there anything you would like to say about your experience of creating NFTs?

It was an incredible experience working with the other artists in Discord. One thing I learned from The Other Avatars is that groups build momentum. I typically work by myself so it was really nice to come into the community of artists with this project, thank you very much!