Tom Down reconstructs the romanticized landscape

Tom Down’s paintings reveal a new perspective on romanticized landscapes, exploring the divide between our perception and the reality of these familiar scenes. His process starts with a physical model, crafted quickly and from everyday materials like cardboard to emphasize the artifice of the setting. The final works are flat, minimal, and a bit surreal, suggesting that they too are props and models in a larger scene.

Tom received a BFA (hons) in Painting from the Wimbledon College of Art in London and completed a residency at Meantime in Cheltenham. He has since been shortlisted for competitions including the 2016 Jacksons Art Open Competition and the 2015 National Open Art Competition. His works have been shown in group exhibitions, most recently at Collyer Bristow Gallery, the Beep Wales International Painting Prize, and the Royal Academy Summer Exhibition.

My work revolves around romanticized landscapes, filtered through those familiar images to all of us – film, TV, Illustration, advertising, and of course, other paintings. I’m constantly fascinated by such clichéd scenes of alpine vistas, desert valleys, snowbound landscapes, and forest scenes. I’m interested in the gap between our perception and the reality of these archetypal places.

All my recent paintings have started life with a physical model, which are made out of low-fi stuff such as cardboard and polystyrene found around the studio, built deliberately quickly so they look like they might fall apart at any second. A wonky wall here, a bit of exposed blue-tack here, visible lines of glue running along the joints. These are all references to the artifice of the thing, a constant reminder you are looking at a poor facsimile of a place rather than the place itself.

The paintings are very flat, worked on a meticulously sanded gesso base. They are understated and quiet. Like the models, I see them as more backdrops, sets, and props in the story. They are always alluding to something but never reveal quite what that is.

If I’m painting, I prefer to listen to music. Mostly 80’s pop. Something fun that you can dance to.

It’s tricky to choose just one, but probably Caspar David Friedrich’s Morning Mist in the Mountains – so much is said with so little.

I’m a huge sci-fi fan. Issac Asimov, Arthur C Clarke, JG Ballard. I love the otherworldly-ness of the spaces these writers conjure up. I think you can see the Influence in my work.

Works for Sale by Tom Down 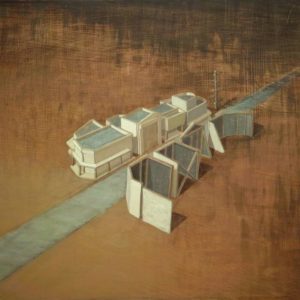 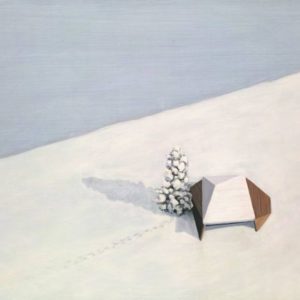 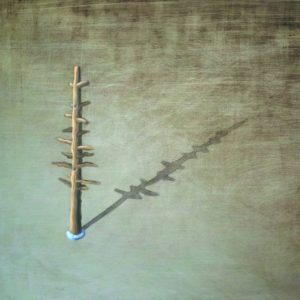 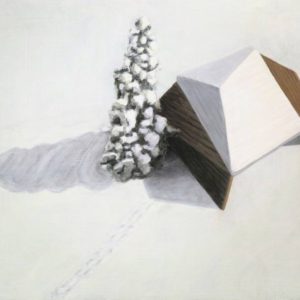 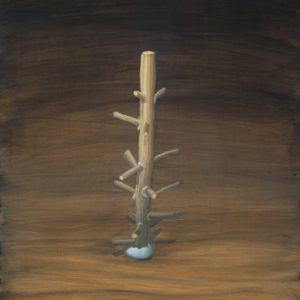