Pauline Zenk is a German-born artist who is currently living in Toulouse, France. Most recently, she has researched the interrelationships between portraiture, memory, and identity in Brazil. She received a Master of Visual Arts, History, and English Literature from the University Christian, Albrechts, Universitaet, Kiel, and the Muthesius Academy of Arts Kunsthochschule Kiel, Germany. She also received an MFA in painting at the Gerrit Rietveld Academy of Arts, Amsterdam, Netherlands.

Pauline was an artist in residence in the Drawing Center in Medellin, Colombia. She researched collective visual memory of Brazil in the Photograph Archive of the Mario Andrade Library during her art residence in “Estudio Lamina,” Sao Paolo.

In her artwork, Pauline explores the dialogue between photography, painting, and memory. She often uses found imagery that is pulled from magazine ads, newspapers, photographs, and TV screen shots. With a muted color palette and penchant for blurring the features of her subjects, she creates portraits and nude studies; she explores themes of identity, public versus private life, and the commercialization of the body.

What are the major themes you pursue in your work?
I kind of reject the idea of working on a theme or topic, as it reminds me too much of art school. Also I find that a concept or theme as defined by words only limits or can only insufficiently grasp the innumerable ways in which an artwork can communicate or be perceived.  I prefer to follow my visual instinct and emotional constitution, which usually leads me through the creation of one series of artworks.

However, I can of course say that my major theme is the human being. I like to play with the evocation of feelings, atmospheres, and personalities. Whenever I draw or paint a figure it is not really a person but just my idea/image of that person, as I filter it through my mind.

Recently I worked a lot with movement and models. Dancers, beauty, ballet, and acrobatics never cease to fascinate me. I like the power and the emotions expressed through the body. I also like to create a feeling or atmosphere, or maybe just to recreate a certain feeling in a painting.

In my drawings, I work with old found photographs and portrait photographs from the Sao Paulo Photo Archive. At the moment I am preparing an exhibition about drawings inspired by photographs of European Migrants to Brazil. This topic touches me, as I am myself often wandering around finding different homes.

Generally, I prefer not to talk too much about the feeling that I wish to convey through a painting. I would rather not decipher my work through explanations, because what I am actually looking for in my artwork is transmitting something which the viewer can then create thier own interpretation. My objective with every new work is that another person looks at my work, and feels inspired by it, and interprets it in his/her own way, connecting to it on very different levels I would have never thought about. For me that is the power and magic of art.

What was the best advice given to you as an artist?
When I was an exchange student at the Rietveld Art Academy in Amsterdam, one of my professors gave me this marvelously simple advice: “PAINT WHAT YOU WANT”. These words have resounded in my mind for a long time, and it was the best advice ever given to me. It meant so much to me at that moment and still means a lot to me: it meant to just concentrate on painting, creating, and focusing on my own development, rather than being intimidated by the opinions of others.

Other than that, a comment that really helped me was a sentence uttered by an art activist, idea giver, and the owner of Estudio Lamina, which is an inspiring art residency in Sao Paulo. While I was there, as an artist in residence, he introduced me to his world. He said: “Art is about sharing.” To me, this meant that art is something you can give to the world; you can reach out across distances and differences in order to touch another human being.

Prefer to work with music or in silence?
I listen to music when I work all the time. I think it helps me escape this world, a little bit more than usual while painting, and makes me concentrate better.  Also, music makes me forget the sounds of the mice in the studio, which may otherwise distract me.

At the moment I am listening to “Monument” by  Röyksopp & Robyn on repeat. Musicians I most often listen to: Portishead, The Do, The XX, MGMT, Daft Punk, Purity Ring, Phantogram, Staygold, M83, Alpine, Gorillaz, Massive Attack, Bjork, Artic Monkeys, Cristal Castles, and Little Dragon.

If you could only have one piece of art in your life, what would it be?
Oh, no doubt about it: “Madonna di Loreto” by Caravaggio. I love this artwork. The Mary is depicted as a normal woman, standing in a threshold, having opened the door to a couple of poor people, who are kneeling in front of her. The expression on Mary’s face is fantastic: she is being moved by what she sees; she has a very soft look on her face, and yet is a real woman, balancing her child on her hips. The poor couple is depicted in an incredibly daring way; their feet are nearly reaching out of the painting, and their hands are old and worn from work. I guess, you have to see the works of other painters of the time in order to understand how modern, daring and fresh this work is to a contemporary audience.

Who are your favorite writers?
One of my all-time favorite writers is Gabriel Garcia-Marquez. In his novels and stories he weaves reality and magic into each other without any marked difference. I am a great fan of Latin-American Magic Realism. This idea, that reality and magic walk hand in hand, happily illustrating each day of yours, appeals to me very much. I try to live with this feeling and I try to capture it in some of my paintings.

Jack Kerouac’s “Book of Blues” is the poetry/book/author I couldn’t live without.  His fresh and daring poetry always gives me a creative shock/bolt and greatly encourages me to do the same with paintings!

Works for sale by Pauline Zenk 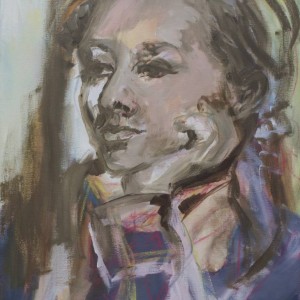 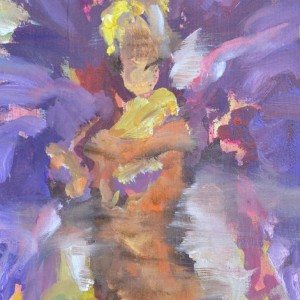 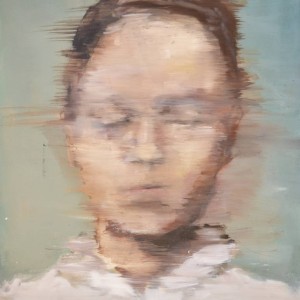 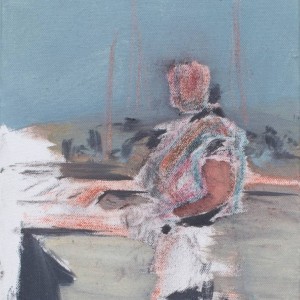 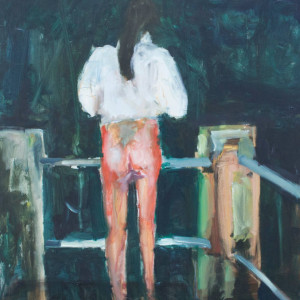