Scott Troxel draws on the aesthetics of bygone technology and the forward-looking designs of the Atomic Age and mid-century modernism to make dynamic, retrofuturist wooden sculptures that evoke nostalgia for the past as much as they look to the future. Fascinated by the way pieces of technology, culture, and design reveal their age, Scott aims to make works that cannot be pinned to a specific era. Scott has exhibited his work at numerous fairs and exhibitions across the United States, including The Other Art Fair New York, and his works are held in private collections across the United States, Canada, Europe, and South America.

1. Tell us about who you are and what you do. What’s your background?

I am a wall sculptor that works primarily with wood and paint. I do sometimes incorporate metal, reclaimed wood, found objects and man-made materials like PVC and Azek. I attended Temple University and got my degree in film, although I was originally an art major, and I ended up pursuing a career in product development and design and brand management. While I enjoyed bringing over 200 products to retail from raw concepts, I decided to begin working on my art again at age 43. After a few years, I had enough work and momentum to transition to being a full time artist and I haven’t looked back.

2. What does your work aim to say? What are the major themes you pursue in your work?

I am inspired by design and technology throughout the twentieth century, such as mid-century modernism, the Atomic Age, and art deco. In terms of what my work is trying to say, I tend to expand upon Frank Stella’s famous quote “What you see is what you see.” While the viewer tends to bring his or her experiences to my work and “find” something familiar in it, my goal is to create art that features strong composition, balance, color, form and movement. My work relies heavily on these pillars. I then incorporate themes of aging, organic versus man-made, and new versus old in the sense of how we engage with technology, design, and aesthetics across generations.

Specifically, I use the example of mid-century modern design. It has the rare ability to be timeless yet dated, modern but retro, organic and grounded but still futurist and otherworldly. I find this concept fascinating, and it is the foundation of what I try to achieve in my work. I want it to feel both modern and bold but perhaps from another era—when it was cutting edge, before time passed it by and changed the definition of “new or modern.”

An example of my work that demonstrates this idea would be “Achtung III.” The piece is bold, graphic and nods to both hard-edge abstraction and post-painterly abstraction. But it’s also modern and slightly distressed and grungy. The color palette was taken from a 50s book cover that has amazing design and color.

3. Can you walk us through your process for creating a work from beginning to end?

My process is significantly calculated and pre-determined. I start with a concept or raw idea—similar to how I would approach a product development project. I spend hours in graphic design software refining the concept and purging bad directions. I do this mostly from a modeling standpoint, as it is difficult to work with the materials I use without a clear direction. Once I have a concept dialed in, I gather my materials and begin constructing the piece in my wood shop. Usually, the piece ends up around 70 to 80 percent true to my mockup. Obviously things change when creating in the studio, but my direction is mostly clear. At this point I bring the piece to my finishing studio to paint and mount the piece. In a nutshell, it goes from a concept on a computer screen to the wood shop to the studio where it is finished.

4. What are you working on next?

I am expanding upon my monochromatic series, which challenges me to focus on composition by using a very limited color palette.

5. Who are your biggest influences and why?

I am heavily influenced by industrial design and movements like Art Deco, Mid Century Modernism and the use of plastics in the 1970s. I am inspired by artists like Frank Stella, Franz Kline, Martin Puryear, Harvey Quaytman, and the tondos of Leon Polk Smith. But I am inspired by all great art, no matter the movement or artist—I also love the work of Magritte, Picasso and Giorgio de Chirico. 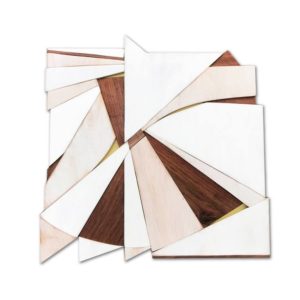 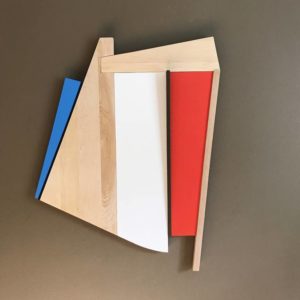 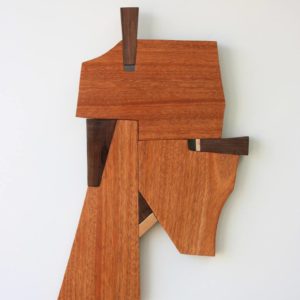 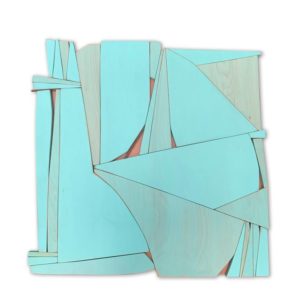 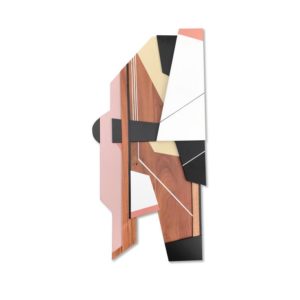 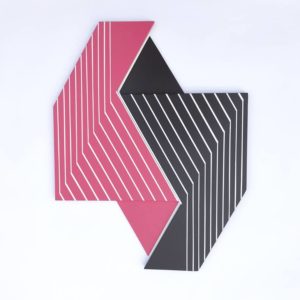