Patricia Kaliczka’s spatial paintings transport us to the fourth dimension

Patricia Kaliczka is an emerging artist living and working in Budapest, Hungary. Patricia received an MA from the Hungarian University of Fine Arts, Budapest, and studied at the Faculdade de Belas-Artes at the University of Lisbon in Portugal. Patricia’s paintings are depictions of objects fluid in time and space, in what she considers to be the fourth dimension. She overlaps forms, ranging from everyday objects like clothing and furniture to historical and mythological figures. Rather than focus on one narrative, she emphasizes the cohesion of these subjects as they transcend spatial and linear boundaries.

Patricia has received numerous awards and scholarships for her works, including the Derkovits Gyula Scholarship, the UNIQA Gruber Béla Award’s Esterházy Kunstpreis, and the Ari S Kupsus Salon Concert Society Prize. She has exhibited her paintings in solo and group exhibitions in Hungary and the UK. This year, she has had three solo shows in Hungary at Viltin Gallery, Fészek Gallery, and Horváth Endre Galéria.

It happened about three years ago, around half past eight, on the first floor of a block of flats, in a sober state of mind, that I was hit by a notion of how I would experience the fourth dimension. I imagined it as if everything happened at the same time: in a certain point of space, the forms that have ever existed, the ones that are existing right now, and those that would ever exist in the future are all presented, transparently overlapping, running into and percolating through one another.

Through my works I keep trying to articulate this permeable quality of the spatial and temporal states of the world, and thus of the mind. The canvas itself is an attempt to capture the constant flux of material and thought in space and time by means of paint. From an Imperial style sofa, the material turns into vitamin-C, then to the color red, then to an ocean current, then to a dog’s fur, a boomerang, a Chinese porcelain figure, a remnant of a Renaissance fresco, a white line, etc.

The words of David Bohm, who was truly a genius physicist of the 20th century, may shed more light on the root of my obsession with time and space, dealing with it rather in a scientific and spiritual way rather than in the science fiction manner: ‘All parts ’merge and unite in one totality.’ This undivided whole is not static but rather in a constant state of flow and change, a kind of invisible ether from which all things arise and into which all things eventually dissolve. There is really no such thing as a thing; all objects are dynamic processes rather than static forms. To put it crudely, one could say that nouns do not really exist, only verbs exist.

A practical one: a painter should not have a favorite color. And a theoretical one: follow what you think is correct, and don’t give a damn what others tell you or think of you. So basically it means never take other’s advice – or at least more seriously than your own.

I would say both; it depends on my current approach to concentration. I think sometimes I could be disturbed by silence, but never can be disturbed by music or by any sound in general. Since I work in a shared studio, usually one of us just puts a record on and everybody is listening to that.

Hard choice. First, I definitely wanted to say Velázquez. But I adore him too much to take any of his pieces away from the public eye… so I would go for the Growth of the Night Plants by Paul Klee.

Besides the Hungarian ones, I really love the works of Balzac, Thomas Mann, Tolkien, Platon, and Umberto Eco, and at the moment I’m reading Walden by Thoreau and The Roots of Civilization by Abdullah Öcalan.

Works for sale by Patricia Kaliczka 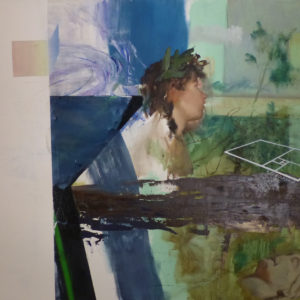 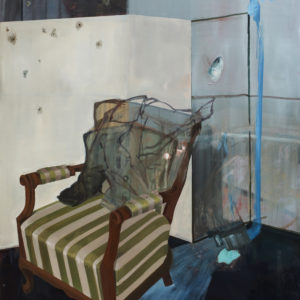 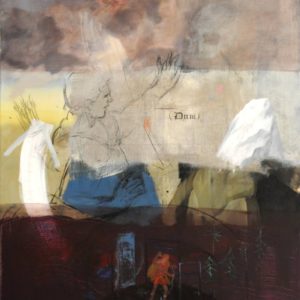 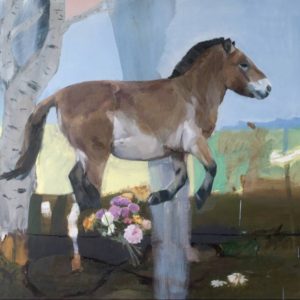 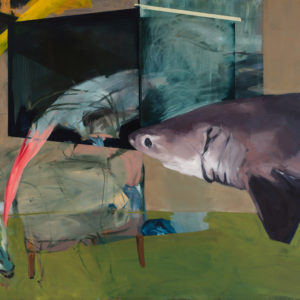