Favorite materials to work with?
Presently I am focused on painting. I work with acrylic with oil overlays on canvas, linen and board. I have evolved through most artistic and new technology media: Drawing, bookmaking, photography, video art, community video, performance art, game design, virtual reality world-building, installation, visionary architecture, colab networks, human color and resolution response studies, prototyping, stereography, and park design.  Painting has been my consistent focus throughout my life.

How many years as an artist?
I have been an artist for 50 years. As a child I took a bookmaking class in the Ft. Worth Museum of Contemporary Art (now The Modern).  I practically lived at two museums in Ft. Worth: The Museum of Contemporary Art and the Children´s Museum. The MCA Director, Henry Hopkins, would occasionally drive me home after he would close the museum in the evening. During a return trip from NYC in my early twenties, I was contracted by Hopkins to shoot both the Dennis Hopper and Rauschenberg opening receptions.

Because I won an award as a young painter, I was a frequent guest to Ted Weiner´s Japanese garden estate. The Texas oilman was a life-changing mentor and I had access to his extensive library of Japanese art.  Weiner was also on the Desert Palms Museum Board of Directors. I painted on his estate, surrounded by works of Henry Moore and Noguchi. Although I had won a four-year full tuition art scholarship to a local college, I had my eyes set on the San Francisco Art Institute and New York´s Pratt Institute.  I attended Pratt Institute.

Where is your studio?
Just recently I moved out of a Broome St. studio in NYC. In 2013, I established a transitional studio in Neptune Township, New Jersey, one hour south of NYC. I presently live in Shark River Hills. Since 2007, I’ve had a studio in Mundaka on the northern coast of Spain in Basque Country. In Mundaka, an international surfer’s village, my studio is over the water, sitting on six pylons at the month of the river and overlooking Biscay Bay. From 1996-2005 my studio was in Monterrey, Mexico. While living in Boston/Cambridge for 20 years I mostly had a studio in the Piano Craft Guild, an art housing complex of 200 studios. I was among the first artist to live in SoHo in the early 70s as I returned from the Vietnam War and worked at the Museum of Modern Art.

What themes do you pursue?
Presently I mostly do figurative abstracts, both personal and universal themes. Plus I link to an abundance of world histories and creative critiques of environmental issues to macro-cosmology notions.

I am currently sensitizing my paintings to understand how as humans we can change their molecular structure in positive and nurturing ways with imagery.  The Sufi did this technique with viewing series of patterns and color to reach nirvana. I had this experience in a Sufi House in Cambridge.  In my paintings I may move to seeing series as story boards or each canvas to be a specific narrative of a theme.

A parallel thread in painting is titles, which brings into view, perception, and consciousness that which would not otherwise be visible.

Where can we find you outside the studio?
Once every two weeks I go to Manhattan’s Lower East Side and Brooklyn, and occasionally San Francisco.

What’s around the corner from your place?
Presently the Atlantic Ocean, NYC, Washington D.C., and Boston. Also in Spain, Biscay Bay and Bilbao, Barcelona, Madrid, Paris, and London.

What was the best advice given to you as an artist?
Ted Weiner, Texas oil man once said to me: “Study the Japanese Masters to gain an insight into abstraction.”

Day job?
In between series of paintings and intensive painting bouts, I am an artist-designer and systems scientist who guides the transformation of organizations to the next evolutionary step. I enable social creativity performance into an organization’s culture. I have the capacity to build a diverse community to sensitize peripheral vision and creativity through experimental and pilot project worldwide. My humanistic and community development life-long work creates the conditions to optimize transforming organizations to address society’s challenges. What does that mean? I bring big, almost impossible ideas, to the tables of regional movers and shakers.

If you could only have one piece of art in your life, what would it be?
Gabriel Orozco’s split and reassembled Citroen to morph into a working motorcycle.

Is painting dead?
The artist/designer/prototyping specialist is a fabricator of artifacts, which have the potential of enabling our image intelligence and thus enhance new thinking. Both artist and viewer have the potential to be congruent in the level of abstraction.  They can mutually suspend beliefs of present world views to enter a deeper transcendence of agitating new thoughts. The purpose of doing so is to align a heart-brain to a creative and positive development process. This alignment creates a path from molecular, biological, and cultural genesis to inform a map of an individualized, social, and humanistic “event horizons.”

Seeing “event horizons” is a systemic way of knowing, which opens the higher periphery brain structure to accept a new way of viewing and creating empathy in the world. The question is the how and not the why of painting. The “why” of painting is too open-ended to be of value.  Of greater value for an artist-scientist is the instrumental and concentric circles of skill building: Self knowing, what is your real work and autonomy in shared enterprise.

In the end, a hyper-relational coziness of a painting is how it sets in motion an “ah ha” moment.

In a broader scope (as an artist and systems scientist), and in the spirit of economic revitalization, I seek commissions to do large format paintings for large atriums or lobbies. In this way I can create the conditions for unemployed and under-employed youth to develop, grow, and progress as future artists in expanded world views, craft and technique, art production systems and marketing.  In this way painting is not dead and visible to a larger public.

Works for sale by Greg Rivera 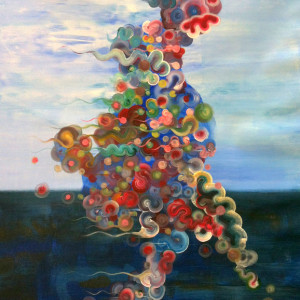 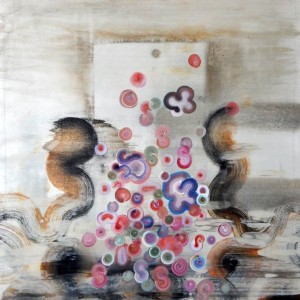 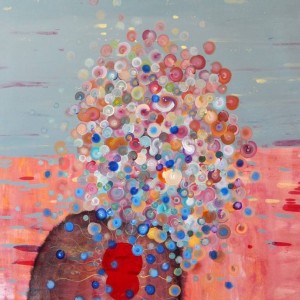 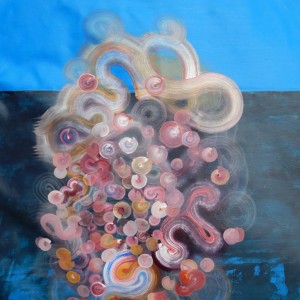 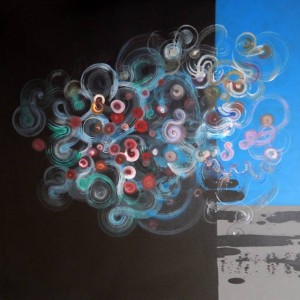