Ronald Hall’s paintings tell a story. Rich in narrative, his pop art works address historical realities through a contemporary filter, rendered for a digital generation into a language more familiar to them, certainly less dry than their history textbooks. The Brooklyn-based artist draws from his experience in video game and digital design, using painting as an outpost for his solo efforts. He’s exhibited in group and solo exhibitions throughout the U.S., and has received residencies and fellowships from NARS and the Artist Trust organization of Washington State.

Ronald’s work exemplifies the wonderful ability of art to vivify nuances in culture, particularly social and political landscapes. Ronald’s paintings tell of lived and endured oppression, with sensationalized narratives paralleling what you’d find in a film or a great series. His upbringing in Pittsburg’s crime-ridden neighborhoods in the 80s and early 90s and time spent at the Art Institute of Pittsburg exposed him to tribulation first hand, inspiring him to turn to art as a means to amplify and educate. He draws inspiration from more traditional, and arguably bygone, sources such as history books, newspapers, and movie clips, combined with a contemporary digital aesthetic. In his paintings, you’ll find figures and components floating as they would on a screen, empty speech bubbles and thoughts suggesting a mathematical human process, an algorithmic path we travel to comprehension. Hall allows viewers to embody his characters, providing an immersive experience that’s both playful and impactful in cultivating a heightened awareness of the story he’s presenting.

We chatted with Ronald about his work Free Soiling, telling the story of Henry “Box” Brown through a surreal scene.

In Free Soiling, the use of classic “American” imagery you’d see on a high school campus mitigates the heavier subject matter that surrounds, keeping the work playful despite its exposure of deep societal fracture. What’s the significance of this juxtaposition? Are there any specific artists who’ve employed a similar technique that you look to for inspiration?

There are many artists, past and present, that I look to for inspiration, but I’ve gotten to a point in my career where I’ve found that mentioning them tends to allow people to take away from the attention of what I’m trying to do in my work, therefore I’d really rather not list them. I think the word you use “playful” is a word that could be used to some degree of what I do in my paintings, I think I would say that speaking about racial issues, or any serious societal problems, could be better said and dealt with through a bit of slight humor and lightheartedness, while still keeping the seriousness of the subject.

The title of the work, Free Soiling, is a reference to the Free Soil Party of the mid 1800s, which rooted its abolitionism in resentment of black labor as competition. If the upper right scene evokes this, what then does the lower left character make of it all? Is his speech bubble blank as a sign of perplex or as an offer for the viewer to “fill in the blank,” so-to-speak?

Yes, It is exactly that, an offer for the viewer to fill in the blanks. I’ve always liked the idea of what I call, “interactive” paintings, meaning the kind of paintings where I myself, enjoy the idea of putting my own stories to the meaning of a painting that I may see in a gallery or museum, so I decided that that’s what I’d like the viewer to get from looking at my work as well. My paintings are narrative, but they often fictional narratives surrounding real life characters that once existed. The man in the crate is Henry “Box” Brown, a 19th century Virginia slave who became known as the slave that escaped his captives by mailing himself to freedom in a wooden crate. He later became a well known speaker against slavery.

I’m curious about the black orbs. To me they’re ominous, and recall the effect of a cue mark on a film reel, signifying a change needed. What did you intend with them?

Your interpretation is interesting and it’s the kind of response that I enjoy hearing from viewers of my work. However, my true intentions of the black circular objects, and often times other graphic-like objects within my work, is to help create balance and substance within the overall composition of the piece.

I know that you have a background in digital design and have worked specifically with video games. What sort of unique creative release does painting offer you? How do you consider your own personal experience in this outlet?

Painting is different than video game development in many ways of course, but for me the biggest difference, and most important difference, is that painting allows me to truly think and be creative for myself, and I love that! What I mean specifically is that in painting, there is no collaborating with other artists, there is no one in the studio with you. You are commander in chief, that in itself serves as a relief from other occupations of all kinds, and not just Game Development. I needed to get away from always having to collaborate with others for creative ideas, I needed to create my own world! And that’s what painting allows me to do, that’s the beauty of it all! 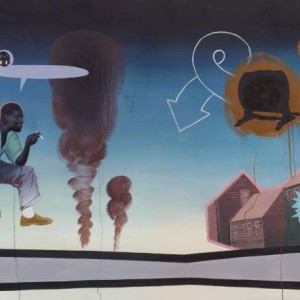 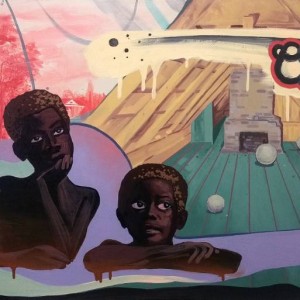