It’s
in the nature of surveys and group shows that you won’t like
everything, but a good one will have a high enough percentage to make
a show within a show which particularly appeals, and the rest will
provide valuable context. That’s a fair description of my first half
dozen choices…

Nick Knight, photographer-founder of the art of SHOWstudio, has packed
forty artists into an energetic and confrontational mixture of art and
fashion which focuses on the corporeal. It’s worth checking out just
to remind yourself of the power of Abramović and Ulay’s ten minute
shouting match projected up large. But the show also contains some
original Viennese actionism, a blood-heavy mini-show of Franko B,
Nancy Burson’s pre-Photoshop (ie pre-1990) blendings of faces
across race and gender, Douglas Gordon’s burn-out of David Bowie,
Nancy Fouts’ mummified boxing gloves, a near life-sized patterned
nude by Orange County skateboarder-artist Ed Templeton… and more of
like ilk, which is to say the best kind of worst kind of taste.

When Haunch of Venison returned to its eponymous space after a three
year refit it was hard to spot the difference. Only now has the point
been revealed: that the gallery has been extended to run right through
to a new main entrance on New Bond Street. The blockbuster chosen to
inaugurate the expansion takes a subject-based approach to trace the
mutual influences of ten major post-war British painters. It’s a bit
of a mixed bag (are those really the best Caulfields they could find?)
but full of interest. The room of nudes, and all of the
Auerbach and Kossoff are especially good (I’ve been known
to distinguish their similar styles thus: if I like it, it must
be Auerbach – but these are really top Kossoffs).

London has been blessed with some fine drawing-based shows recently:
‘Polemically Small’ at Charlie Smith was excellent in December, and ‘A
Piece of Paper’ is at Madder 139 (to 28 Jan). I’m not sure the
selection at Purdy Hicks is any more radical than those, but it has
some great stuff in it: Keith Tyson’s huge and amazing 1,193-room plan
of a university from 1993; five brand new, typically kooky, Marcel
Dzarma drawings; Gavin Turk’s tea ring stains arranged like dirty
takes on Bridget Riley’s circle drawings; Jonathan Delafield Cook’s
detailing of a barnacle, made mountainous by scale; a beautiful
Wangechi Mutu watercolour collage, and a suite of lively drawings in
matching register by the new-to-me Australian Sally Smart.

This very broadly premised survey (art made in Germany by anyone
or by Germans anywhere) is well worth seeing, especially for
Georg Herold’s canvas-covered painting-sculptures – as above –
plus Thomas Helbig, André Butzer and Max Frisinger. But it’s part of
the point of such shows to provoke, and even accepting the exclusion
of moving images and the decision not to revisit Richter and his
generation or those (Rauch and Skreber in particular) previously shown
to good effect by Saatchi, I could happily have lost several of the
artists featured. Perhaps Magnus Plessen, Susanne Kühn, Michael
Sailstorfer, Sofia Hultén, Rosa Loy, Sabine Hornig, Daniel
Sinsel, Florian Slotawa, Haegue Yang and Cyprien Gaillard could have
filled in the gaps…

This is something of a coming of age for Raphaëlle Bischoff and Paola
Weiss as west end girls, for ‘Chain Chain Chain’ plays off the
surrounding jewelry shops in considering art and value. The
interlinking angles explored are well set out in an accompanying
leaflet by curator Glenn Adamson, half the team behind the V&A’s
big show ‘Postmodernism: Style and Subversion 1970-1990’ (itself open
to 15 Jan). There is, though, a nod to the gallery’s East End origins:
Sue Collis, who’s represented by Hoxton’s Seventeen, formerly near to
Bischoff/Weiss, has exchanged a section of wall between the two
spaces. Oh yes, and the other works – from Leo Fitzmaurice’s
re-modernising edit of packaging, to Nicole Cherubini’s clay that
never leaves its box, via several rather blingier works – are
themselves rather interesting.

Is there no end (qv Newman, Stella, Cruz Diez , Riley, Buren,
Rondinone, Davenport, Lambie, Phelps…) to the lure of the stripe?
Well, I didn’t feel its pull pall in Dutch painter Ditty Ketting’s
complex constructions. She uses a traditional colour wheel system,
spiced by random spinning, to lay her colours over and under cage-like
structures of black, white and grey. That imprisonment of sorts
palpably fails to prevent the bursting forth of her 16 colours. She’s
the most maximal of the minimalists in this bright survey, but all
five (Ketting, Michelle Grabner, Will Taylar, Lars Wolter, Stefan
Eberstadt) have their complexities – would ‘Intricate Minimalism’ have
caught the vibe more accurately? But that’s enough stripes… 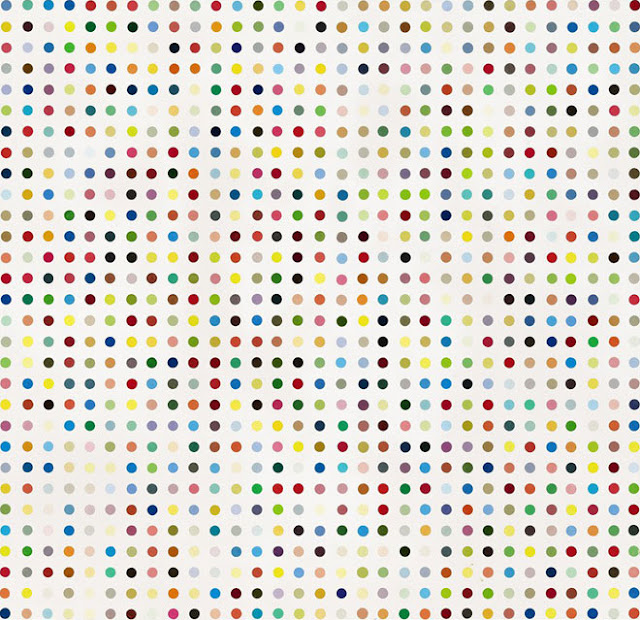 In what must be the logical antithesis of a group show, here’s a
chance to join the dots internationally as all 11 Gagosian galleries
are turned over to some 300 of Damien Hirst’s estimated 1,400 spot
paintings (including, he says, five he made himself). Along with the
spins, they make up a persuasive – if overblown – reducio ad
absurdum of abstract painting as a means of expression. They’re
also Hirst’s most Warholian play on the market, and one he
hasn’t given up despite declaring several streams finished
at his 2008 Sothebys auction (come to that, what has he actually
stopped doing?). As usual this millennium, it’s the performance not
the work which takes centre stage with Hirst – a pity in a way, but he
is good at that.

It’s not easy to take a gallery seriously when (as on the top floor
here) it hangs Picasso next to Lorenzo Quinn without apparent irony;
and, supreme glass-blower though he may be, I’d put Dale Chihuly’s
paintings on the Quinn side of that equation. Get past those
reservations, though, and there’s some spectacular and luminous
Chihuly spread around the lower floors of Halcyon’s new, fourth (!)
and biggest London gallery. The forty-odd glassworks – such as fantasy
shell forms, cascading chandeliers, multi-horned vases and a garden of
people-sized plants complete with pool – reveal the force of a medium
pushed to its limits.

It’s not quite a Halcyon expansion, but The approach has started to
use a second room above its host pub. Young Anglo-Dutch artist Magali
Reus uses it to screen fit young men straining to shift big blue
bobbing barrels in a colour-matched sea. That acts as a literal and
macho counterpoint to the main space’s pared-back installation of
sculptural surrogates which suggest transport and displacement: sleek
riffs on airport security trays, luggage racks, camping mats, cameras
and emergency ladders for train tunnels – the last two hauntingly
combined to suggest a cinematic tracking device. What would its film
show? Perhaps, for all our huffing and puffing, that we’re getting
nowhere…

And now for something somewhat different… I’m not sure I’ve previously
featured an artist normally classified as ‘urban’ or ‘street’ in
my choices, but David Walker’s surprisingly brush-free spray
paintings at the new Rook & Raven Gallery have a distinctive
panache which takes them beyond their impressive spray technique and
the graffiti origins referenced in the many scrawled and decayed marks
which irritate the details. It’s obsessive work: Walker only does
female portraits, which he sees as ‘’the historic measure of painting
and beauty’; and you can still see the effects of the three years in
which he used only black, white and pink.

Images courtesy of the relevant galleries and artists 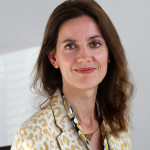