Facing off with Isabella Innis

Isabella Innis’ figurative paintings explore themes deeply rooted in her global upbringing. Brought to life through marbled layers of vibrant, textured brushstrokes, her faceless figures examine human relationships on both a macro and micro scale- ranging in subject from globalization to childhood memory. Influenced by the early Impressionists, and in a reaction against realism, her practice centers on a raw and unfinished presentation of the figure.

Currently based in Los Angeles, Isabella received her BA in Studio Arts from Westmont College at Santa Barbara. Her works have been featured in numerous solo and group exhibitions, including Castelli Gallery Solo Show, Next Gen Group Show, and the Downtown Art Walk Group Show. Her works have been published in Nashville Arts Magazine and Pacific Dissent Magazine, and are held in private collections around the world.

Globalization is a prominent theme in my work. Many of my conceptual contemplations are caused by my exposure to living in cities across the States, the UK, Europe, and Africa. Processing the effects of my childhood in relation to encounters I’ve had abroad has contributed to an unresolved questioning and curiosity that fuels my work. Other important themes my paintings explore are local and socioeconomic differences, privilege, mobility and the birth lottery. I often paint imagery of children and orphans in reflection of parenthood, maternity, childhood, loss/abandonment, and innocence.

I became fascinated with Impressionism at an early age. As a child I often carried around my favorite book titled Linnea in Monet’s Garden, filled with Monet’s famous works, namely The Water Lilies series. I spent many days alone in my room attempting to capture a similar romanticism in my own paintings. In college, my infatuation with painting prevailed after failed attempts to pursue a more “practical” application of digital art. When I first experienced the work of Impressionist painters I had so admired in person while studying in Spain– Degas, Van Gogh, Monet — my conviction to pursue painting became a fierce determination. For me, nothing could match the wonder of texture, vibrancy, and movement captured by the application of paint.

When I first began my practice as a painter I was only interested in producing abstracts. Perhaps it began as a sort of rebellion against the traditional art program where I studied, coupled with a disdain for realism. As my career has evolved, I’ve become more drawn to figurative work, while still maintaining a certain raw or unfinished approach that is characteristic of abstraction– less stream of consciousness, more conceptual basis.

I begin with a series of sketches and an outline of how the pieces will hang together. I often work from photos either off the internet or that I’ve personally taken, but I always juxtapose elements and expressions that did not originally exist in the image. For my last series, I worked only from portraits that I had personally taken during extended trips to Uganda over the last six years. Though I had lived amongst and cared for many of the orphans, men, women, and children that I painted, it was important to me that their faces remained empty, keeping their identities anonymous. I use photo reference only a starter, not the end goal of representation. Some of my most successful works are finished in one day, and others I spend months on. The amount of time is less important than the fit of inspiration I begin a painting session in. I never really know when a painting is finished… I’ve only become better at accepting the moments when my instinct says to stop.

Who are some of your favorite artists?

I am drawn to the fleshy tones and raw, unconventional beauty of painters Jenny Saville and Cecily Brown. My favorite male painters are Adrian Ghenie and Francis Bacon. I admire their ability to capture mystery and darkness using ethereal forms and bright, vibrant colors traditionally associated with happiness. I find the irony intriguing.

In 2015 I founded a summer program teaching art to children in the Kisenyi slum area of Kampala, Uganda. The silence that would capture the crowded, chaotic room in the community hall as I began my lessons left me in awe each time. It brought me overwhelming joy to share in the experience of creating art with a group of children that had never been given the same opportunities that I’d been privileged with. To watch how creativity had the capability to break the chaos of fighting and survival instincts of the slum environment even for just one hour in the day was unforgettable.

Works for Sale by Isabella Innis 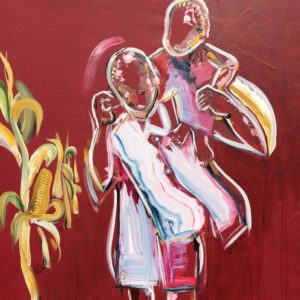 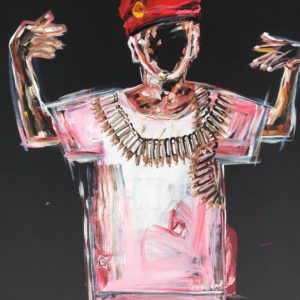 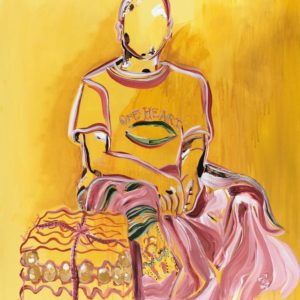 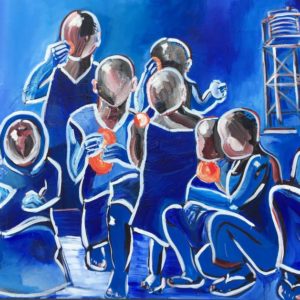 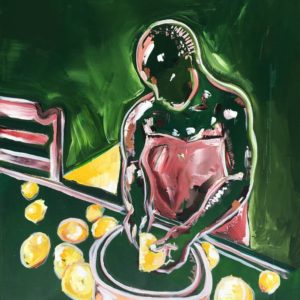