Brooklyn: An Ode To New York

What better way to celebrate our love for New York City and excitement for the upcoming Brooklyn fair than highlighting three TOAF artists whose work celebrates the big apple?!

We asked three Artists: Gerry Buxton, Daniel Root, and Michael Wallner who are all showing at the upcoming fair some questions about New York City. 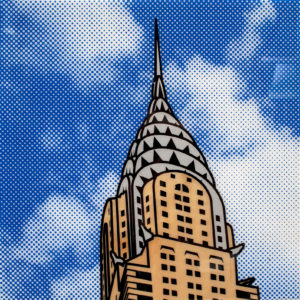 As a non-New Yorker, what drew you to make work based on the big apple?

New York is the type of city you feel familiar with even when it’s not your town. You see it on the news, you see it in on the TV, you know it from the silver screen, you hear about on it your favorite records, you know it from its famous and infamous sons and daughters.

NYC is more than a city, it’s an iconic brand, it’s a fantasy, it’s a state of mind, it’s the showtime kids on the subway, the yellow cabs, the bagels, the hotdogs, it’s the whole world condensed into one mad, seething mass of humanity and I love it.

How do you choose buildings to feature in your work?

I like to walk, I like to look at the buildings from street level, I like to capture how people move through the city and interact with the space. I like to get lost and to find new angles on old favorites. 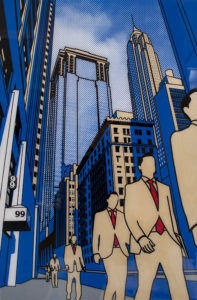 It starts in a Brooklyn diner; eggs, bacon, terrible coffee and a waitress with a voice husky from years of smoking. She knows her regulars, what they want and how they want it, I’m a stranger here but I feel welcome. Then out and about with the camera, it’s a cold, crisp autumn day, the leaves are turning I walk the streets past the grand townhouses wondering who lives there. I fall in love with a water tower and photograph it from every angle, the infatuation fades and I move on.
I grab something form a deli and head to the river to catch the ferry to Manhattan, I love this boat ride, I sit outside and turn my jacket collar up to the cold, I see all the sites, some familiar some not, I make mental notes of buildings I want to see up close. I get off at Wall St, I’m a stranger here amongst the suits but in the buildings, I see old friends, characters from past prints, I remember illustrating them, cursing all the windows that had to be done individually.

I head to the lower east side and to the Bowery, here I’ll find friends, music and somewhere to drink. This is where I’ll spend the evening, I could spend a lot of evenings here.

Can you tell us about your New York night series, what is your process and how do you choose locations?

Several years ago, I started taking early morning walks around downtown.  This was after walking the East River each morning with our dog for 15 years.  I decided to walk into the city rather than walk the perimeter just to have a change and I started noticing beautiful lighting in the closed bars and restaurants, eventually photographing over 1000, all within walking distance of the East Village.  The city was extremely quiet and there was a peace being alone on the street that allowed me to see what I had walked past in the usual busy evenings.  While I was photographing the bars I also started noticing the predawn/dawn light of the city in general.  In the darker, artificially lit, city there are pockets of light rather than the continuity of daylight.  The various light sources and color temperatures, in combination with the lightly populated streets, present a very different city.  I usually don’t have a destination beyond a particular neighborhood which is chosen rather randomly. 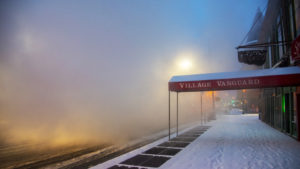 Do you have a favorite part of New York?

There are a couple of neighborhoods lend themselves more to the type of photographs I look for.  The Lower East Side, Chinatown, the East Village and the West Village.  I guess downtown in general.  Tighter streets, more varied architecture, mixed use, mixed income, older buildings.

I love getting up early, assuming it was not a late night, and walking and looking.  It calms me and puts me in the right frame of mind for the day.  It’s best to leave after 4:00am once the bars have closed and the bar set has gone home. I usually get home around 6:30am, put the coffee on, and start reviewing the morning’s photographs.  After that it’s on with the day and if I can squeeze in a nap all the better. 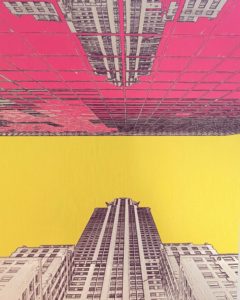 As a non-New Yorker, what drew you to make work based on the big apple?

Apart from London where I live, New York is my favorite city. I love its historic buildings; its iconic landmarks, the famous skyline, and the colors that fill its bustling streets. These make the Big Apple my perfect artistic muse.

How do you choose buildings to feature in your work?

My art is created from my own photographs and printed on brushed aluminum. The pieces work best with simple outlines, intricate linear designs, and patterns – which feature in abundance in New York with buildings like the Empire State, Bloomingdales, the grid patterns of its streets, or the abstract patterns of Central Park from the air. The grain of the metal of brings out these elements, giving the work an etched appearance.

I’d kick-off the day with a hearty breakfast at the Brooklyn Diner, a classic New York eatery and a trip to the top of the Rockefeller Centre (my favorite view of the city), followed by a helicopter ride with FlyNyon (the best way to appreciate the beauty of the skyline, the skyscrapers and the layout of the streets). After a stroll past the Chrysler Building I’d head to the magnificent Grand Central Station (my favorite building in the world).  Here I’d snack on a Reuben sandwich from the food court while I people watch at rush hour.  A brisk walk along the High Line would build up an appetite for a hot dog at a Met’s night game. It’s going to be a busy day. 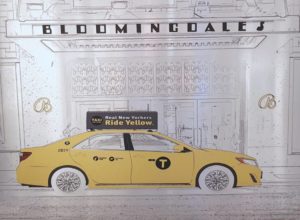 You can see work by all these artists at The Other Art Fair Brooklyn, 7-10 November at the Brooklyn Expo Center. 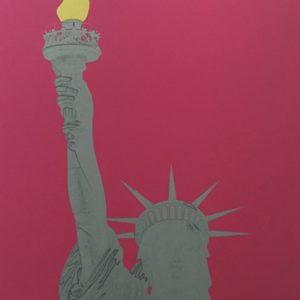 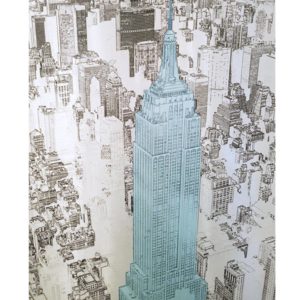 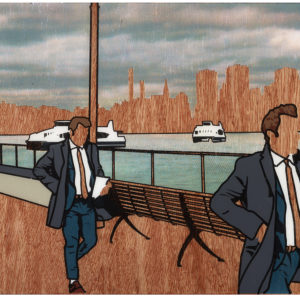 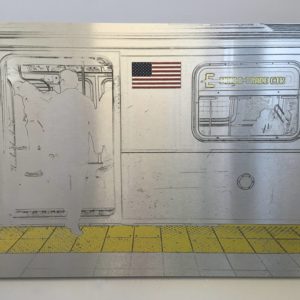 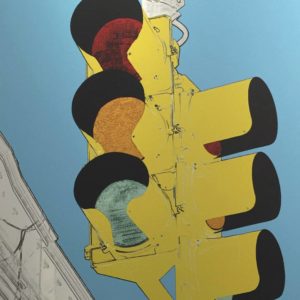