Zero Point  from “Pillars of Creation” and The Garden of Good and Evil  from “In the Bedroom,” two works by Javiera Estrada to be featured at Boîte Noire Gallery

Mark your calendar for Boîte Noire’s upcoming exhibition—it’s not to be missed. Featuring two new series by Los Angeles-based photographer Javiera Estrada, the exhibition presents works steeped in imagery both feminine and fantastic.

One series, “In the Bedroom,” is a collection dreamy images that mixes vintage and contemporary techniques with contemporary ones. As Javeira explains:

[It’s] an intimate perspective of the space between the subconscious dreamworld and fantasy.  Portrayed through the feminine archetype, this personal journey is a kaleidoscopic explosion of color and imagination interwoven and juxtaposed in the stillness of the environment.

The exhibition will also include work from her series “Pillars of Creation,” which captures inks and dyes suspended in a dark abyss, evoking ethereal sea creatures and nebulas exploding in the sky.

Not in L.A.? Browse Javiera’s portfolio online at Saatchi Art

To create is divine, to reproduce is human

In celebration of his birthday earlier this week, we’re raising a glass to Man Ray, an artist and provocateur whose name is synonymous with the Dada and Surrealist movements. Though he considered himself only obliquely part of these groups, his influence is unquestioned.

Born Emmanuel Radnitzky in Philadelphia, Pennsylvania in 1890, Man Ray spent his early years in New York City and eventually moved to Paris, where he spent most of his artistic career, where he found inspiration in the European avant-garde movement.

He made drawings and paintings first but found his metier when he began to experiment with interdisciplinary methods and photography. Man Ray’s assemblages and images were unconventional for the time, combining mediums and presenting subject matter that was often provocative. Photographers today still draw inspiration from Man Ray’s daring style.

Check out this collection inspired by Man Ray’s photography

#3: Banksy’s Latest Is a Theme Park Unlike Any Other

The art world is abuzz with Dismaland: A Bemusement Park, a new site-specific installation by Banksy that presents a Disneyland-esque park as a dystopian wasteland.

A mysterious and controversial figure in his own right, Banky’s new stunt has some lauding his sinister edge, while others remain nonplussed. Equipped with all the elements of a typical theme park, Dismaland features familiar-ish faces, like Disney’s The Little Mermaid Ariel and Mickey Mouse, except rather than displaying their usual cheer, they’re angry. At Capitalism.

Dismaland is located in Weston-super-Mare, England, in an abandoned lido where Banksy had taken swimming lessons as a child. The exhibition hosts works by several artists, including Damien Hirst, Mike Ross, Saatchi Art’s own Zaria Forman, and more.

The works on display flip conventional fairy-tale archetypes on their heads, bemoaning social and financial inequalities that lead to widespread hardship among Britain’s resort towns. The dreary landscape was plagued by rain for most of its entire first week of operation, underscoring the pervasive bleakness Dismaland seeks to evoke.

Wondering how to make the most of your treasured Polaroids or Instagram snaps? We’ve got an idea for you—actually, 21. We’ve compiled a list of ideas for how to display loose photos, whether they are Polaroids, family photos, or Instagram pics.

Empty, open walls become a gallery, the canvas for your photos to shine. Arrange them grouped as an ode to the classic salon style, or hanging from the ceiling. Use simple household items like string, push pins, spare frames, and more to help you create a stunning display.

Get instant inspiration and fill your walls with memories with these easy ideas – part one, and part two.

#5: A Compilation of Warhol’s Polaroids to be Published this Fall

A key figure on the 1970s scene in New York, Andy Warhol managed to capture the lives and dazzling nightlife of some of the era’s most memorable figures during their heyday. Warhol was ahead of his time in obsessively documenting both himself and those figures who graced his life; today distinct moments in time are immortalized for others to see on Instagram, Facebook, etc.

This September, art book publisher Taschen will release Andy Warhol: Polaroids, a 500 page compilation of the artist’s collection of polaroids. Taken between 1958 and 1978, Polaroids contains plenty of Warhol selfies, as well as candid and intimate shots of his star-studded pack of friends.

Take a sneak peek at more of the polaroids over at NY Mag.

What was no doubt an honest mistake caught the attention of the world this week, when a Taiwanese boy stopped his fall with an expensive painting. On a school trip with his classmates, the 12-year old boy was following a tour at Huashan creative art center in Taipei and didn’t notice an approaching roped off barrier, surrounding a 17th century oil painting by Italian Baroque artist Paolo Porpora. The canvas of the painting was punctured with a fist-sized hole when the boy caught his fall. Luckily, the painting was insured and neither the boy or his family will have to pay for the damage.

Of the event, one of the exhibition’s organizers, Sun Chi-hsuan told CNN,

“When I told [curator Andrea Rossi], he was so shocked that for two to three minutes he couldn’t utter a single word,” Sun said. “But he was actually most worried that the boy and his family would put too much pressure on themselves.”

The canvas is currently undergoing repair by a team of experts, who will first mend the split before restoring the front of the painting.

Read the entire story on CNN.

Graphic artist Thomas Robson has created a cheeky series of works titled “Fluid Pigments,” named for the expressionist-like brushstroke he digitally adds to Baroque and Romantic works. The fist layer of the works exhibit styles evocative of the realism and accuracy found in earlier centuries, whereas the added strokes juxtapose a more messy and freeform method.The effect feels like childlike and unfettered, imposing a hint of chaos into an otherwise pristine landscape. The simple stroke mirrors the grandeur and drama the figures underneath achieve through wardrobe and style.

Check out more works from Thomas Robson’s “Fluid Pigments,” and more of his digital creations over on his website.

What art happenings are you talking about this week? 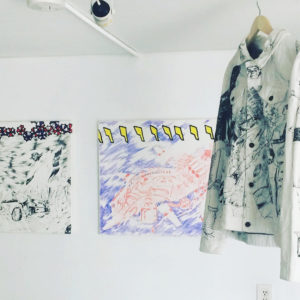 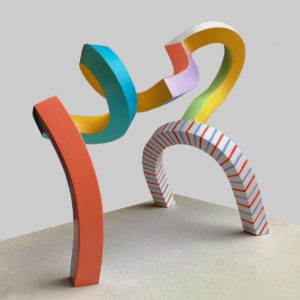 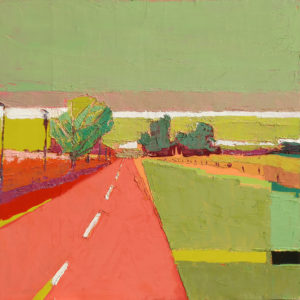