Born in 1834, into a wealthy family of Parisian bankers, Edgar Degas is often categorized and remembered as an Impressionist. Although he shared many of their techniques and subject matter — scenes of contemporary life, the theater and Parisian cafés — the artist rejected the label ‘Impressionist’ and called himself an ‘Independent’. Degas’s academic training gave him a inclination towards Realism and a great appreciation of the human figure. Looking for novel ways to portray the human form, particularly in movement, Degas was drawn to ballerinas as his ideal, modern models of study.

To celebrate the important contributions of Edgar Degas — his depictions of movement, dancers, and the human figure — read on to see how Degas’s work can be likened to three Saatchi Art artists.

The Star (Dancer on Stage)

At the ballet Degas discovered a world that thrilled both his academic taste for classical beauty and his desire for modern realism. Desiring more natural and intimate poses, Degas often portrayed his dancers mid-movement, during their lessons and getting ready behind the stage.

By the late 1880s, pastels were Degas’s primary tools, and he experimented constantly with them, using techniques previously unfathomed — sharp outlines with dry stabs of color, liquid blurs, and his fingerprints — until he finally mastered the medium. Pastels empowered Degas to perfectly capture the frenzied spectacle of the ballet, crisscrossing his strokes to draw attention to the strain, and struggle of the ballerinas’ bodily existence. 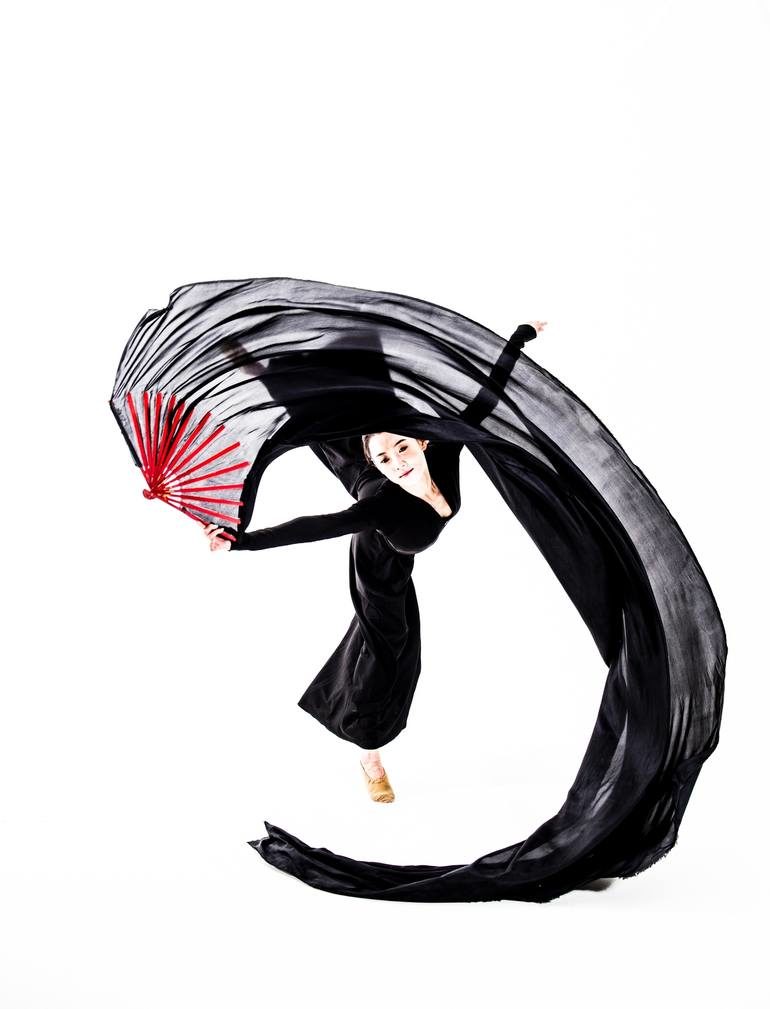 Degas once told the Paris art dealer Ambroise Vollard, “People call me the painter of dancing girls…it has never occurred to them that my chief interest in dancers lies in rendering movement and painting pretty clothes.” Trained dancer-turned-photographer Cody Choi similarly emphasizes the physicality of dance, the trained movements of dancers, and the resulting beauty of flowing fabrics.

Dancers in the Wings

The artist haunted the wings and classrooms of the Palais Garnier, the official home of the Paris Opéra and Ballet, where some of Paris’ poorest young girls strove to become the graceful heroines of traditional plays. Adapting more modern techniques of cropping, emphasizing the harsh artificial lights of the theater and radical viewpoints, Degas effectively stripped away the beauty and illusion of the ballet to give a true representation of the resilience and hard work demanded of the young ballerinas. 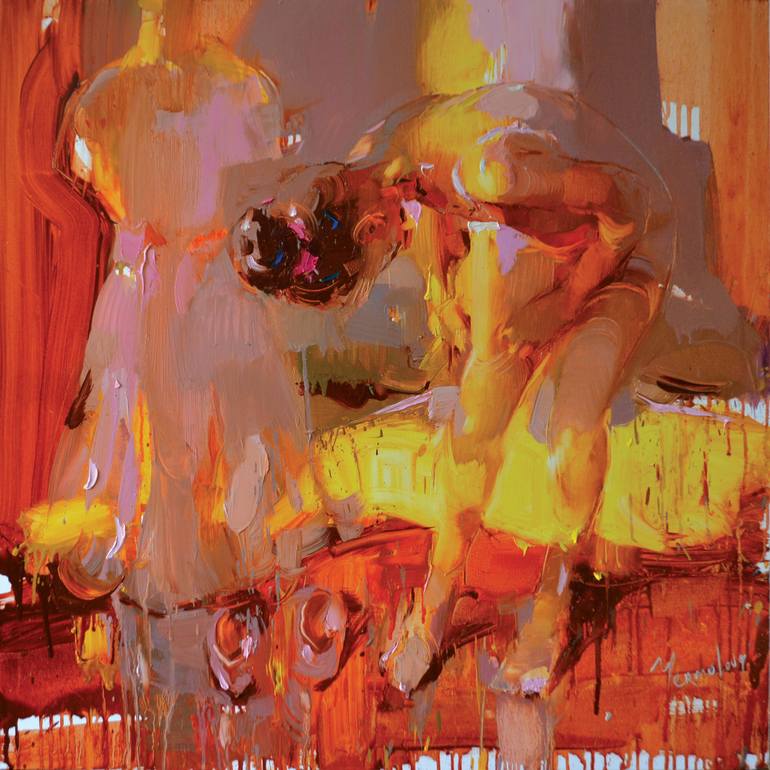 Degas cropped his pictures as a photographer would (and later became one), ignoring traditional composition and opting for more asymmetrical and controversial viewpoints. Likewise, Iryna Yermolova tightly crops her composition to give the picture a snapshot-like appearance, catching the ballerina before her performance.

Throughout his career, he produced approximately 1,500 illustrations of dancers, and in that collection of paintings and pastels, sculptures made up over half of his entire oeuvre. Many of his wax sculptures were created after 1880 when his eyesight began to fail him and he choose to work exclusively on studies of ballerinas and similarly voyeuristic pieces of women bathing.

Degas did not produce a comprehensive collection of ballerina-inspired sculptures, instead his wax sculptures were mostly used as figure studies. However, the one bronze he did complete —The Little Fourteen-Year-Old Dancer — has become one of his most renowned dancer depictions. Degas created the wax figurine in 1880 and exhibited it at an Impressionist exhibition the following year, dressing the ballerina in an authentic tutu and a wig of real hair. 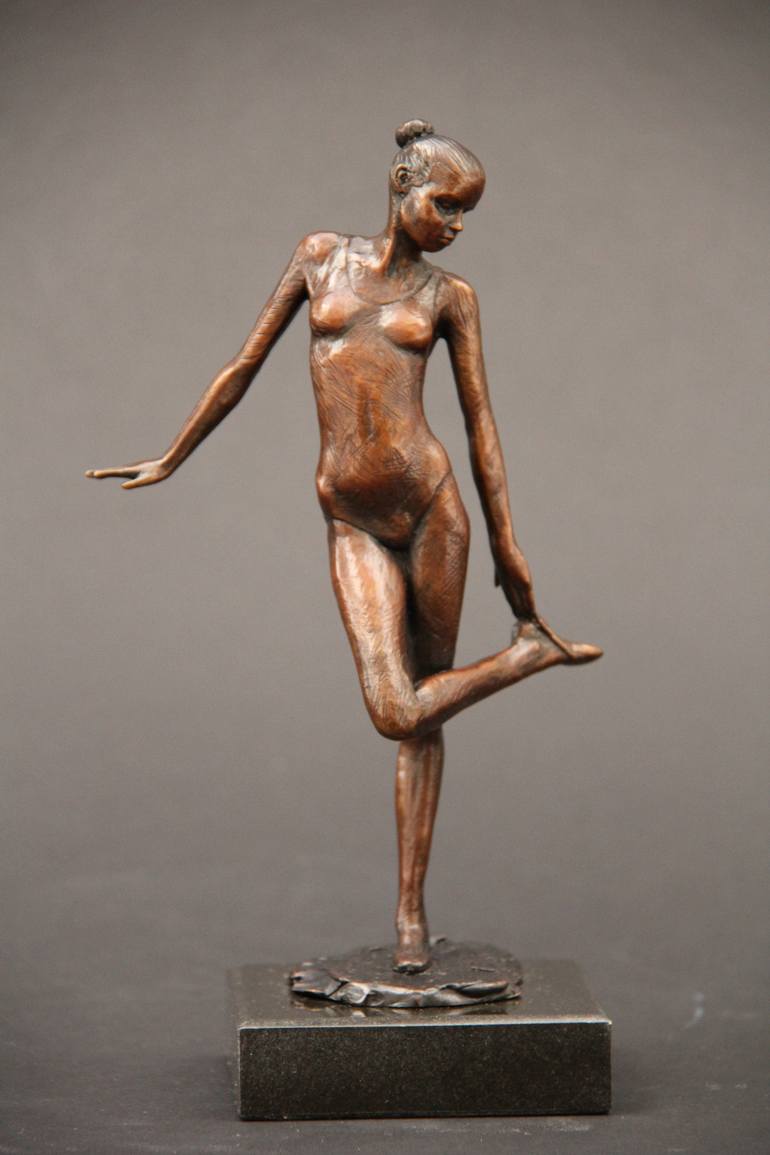 Following his death in 1917, 28 bronze replicas were cast from the wax model. Today, they reside at some of the world’s most prominent museums, demonstrating the timeless beauty and enduring legacy of Degas’s dancers. Similarly to the old master, Micheal James Talbot captures a young ballerina in a quiet moment as she adjusts her shoe. 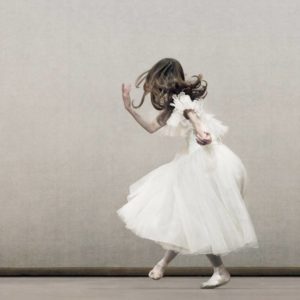 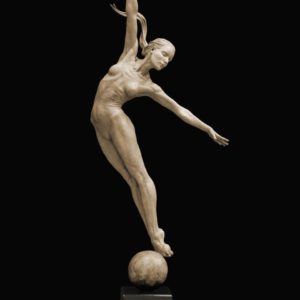 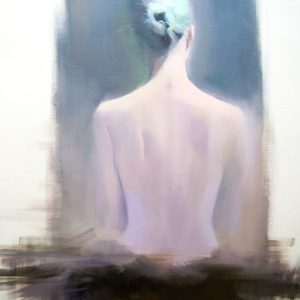 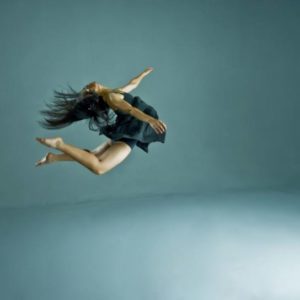 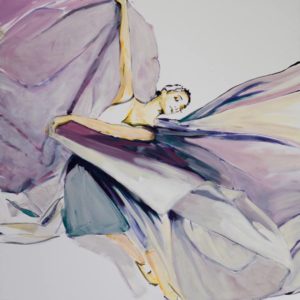 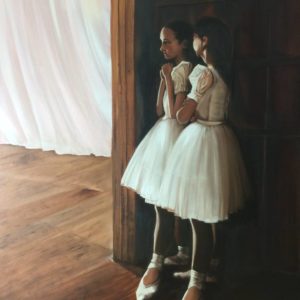 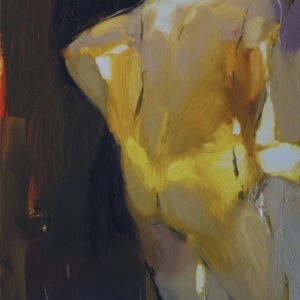 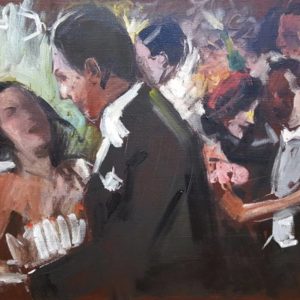 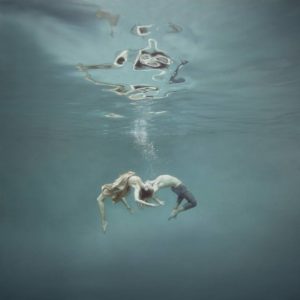 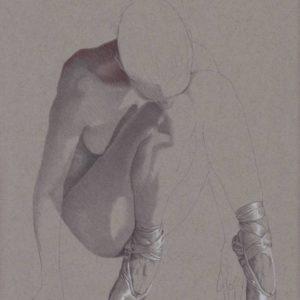 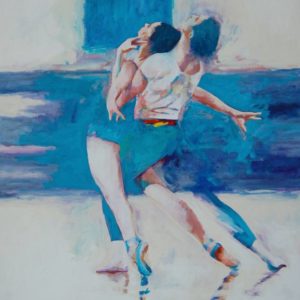 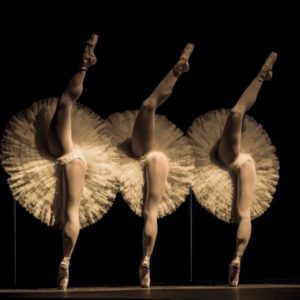 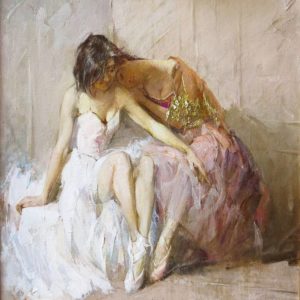 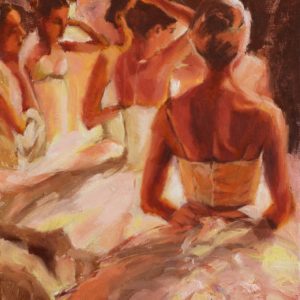