Meet the Others: Glenn Stanton

Glenn Stanton is a British figurative watercolour painter. His paintings focus on the myriad of emotions that lie in the resting human form, and the subtle expressions that are often overlooked in this state.

I’m a figurative watercolour painter making art from my rooftop studio in Norwich. I studied Fine Art at the University of Brighton, after which I returned to my hometown where I worked in a local gallery for a couple of years. At the time I thought this was the natural progression for an art graduate, but I soon realised that I had neglected my passion for making art. After spending the next few years exploring different mediums and art forms (children’s book illustration, sculpture, murals) I shifted my focus to life drawing. And it’s in these past couple of years of painting figuratively that I’m finally proud of the art I’m creating… Which in turn, gave me the confidence to exhibit for the first time in 2018. Since then, I’ve been fortunate enough to showcase my art both in London and New York.

Hmm, that’s difficult. As a man who paints nude women, I’ve found I’ve had to repeatedly defend my work against comments that claim my work is “sexually suggestive”. To which I disagree adamantly; a nude body isn’t synonymous with sex. And it’s my belief that men need to be contributing to fighting these assumptions. I paint the nude form because of the beauty and the subtle emotive nuances often overlooked in body language. It’s because of this, that I don’t have three distinctly separate words. I would instead sum my work up with these three words…

I was in my high school art class actually, and a new student had brought her own watercolours in. She was painting the most delicate green glass bottles. They were beautiful. After that, I fell in love with the medium. I think what draws me to them most is how they compliment my subject matter; both the medium and the skin I paint have translucency, and this combined with a handmade paper support, helps me capture the fragility of the body.

Can you walk us through your process? How do you know when an artwork is finished?

Well my life drawing model is my girlfriend, who is a talented artist in her own right. She’s also an incredible dancer. After a photo shoot of her moving through a range of poses, I’ll settle on one that speaks to me the most. From this point it’s pencil on paper, and then mixing the perfect skin tone. Typically I’ll focus on one body part in the pose, and highlight this area by fully rendering it in watercolour. The remaining figure is left in pencil… I used to erase this scaffolding, but I’ve grown to appreciate the contrast of the raw graphite marks against the muted watercolour skin tones. It’s as though they’re the bones of the drawing. And it’s these initial expressive marks that help ground these floating areas of pigment, and give the figure weight.
As for knowing when to finish… it’s tough, but it’s becoming a lot easier. Often at shows people will see the pencil marks and a half painted figure, and instinctively react as though it were an unfinished painting or preliminary sketch. But as the artist, I recognise a complete painting as soon as there’s an observable focal point. And I usually stop there. Even if most of it is left in pencil.

For the first two months in lockdown I didn’t make art. I was shielding with my brother who is immunocompromised, and so for me personally, creating art was the last thing my mind could focus on. My priorities had shifted and for what seemed like the longest time, I’ll be honest, I felt as though creating art was superficial or trivial. Questioning my worth as an artist impacted me in a very negative way.
It wasn’t until I was scrolling through Instagram, that I stumbled across the #artistsupportpledge …an initiative created by artist Matthew Burrows to help provide a social media platform for artists to sell work during lockdown, who had lost the ability to do so at cancelled exhibitions. The surge of positive feedback after I posted a couple of pre-Covid paintings, gave me the encouragement to fuel a whole new body of work. It connected me to a massive community of artists that were also struggling at the time. Now I talk to many other artists that I wouldn’t have otherwise. So this has definitely been a positive.

It might seem like the smallest gesture, but it was actually a comment on one of my earlier paintings that I posted on Instagram. At the time it was a work in progress shot of a painting I was finishing up for a New York exhibition. It was half painted, with sketchy pencil grid-lines still on show.
“Wonderful, it could stay like that!🤍”
I’d been too focused on filling the outlines with colour, that I forgot what I was trying to capture; the emotion in the hands. Which, coincidentally, was the only part of the drawing I had painted at that point.
That second pair of eyes helped me to stop. And to this day that comment has informed the rest of my practice, and understanding of when a painting of mine is truly finished… I have so much to thank for that.

Shop artwork by Glenn Stanton and other trailblazing artists at The Other Art Fair’s Online Studios. 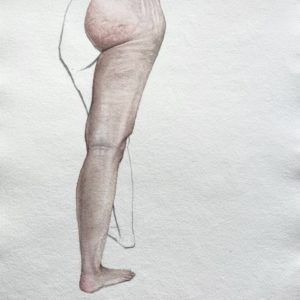 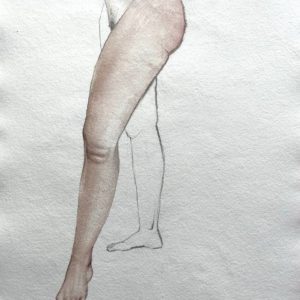