Simon Williams and the Visual Soup of Our Time

Simon Williams draws on the imagery that saturated his childhood—comic books, propaganda posters, graffiti, and advertising—as well as his background in film to create energetic and inventive paintings. Though abstract, the forms in Simon’s works recall the buoyancy of cartoons, the looseness of graffiti, and the non-naturalistic colors of the digital age. Based in Cornwall, England, Simon exhibits his work regularly, with work included in the John Moores Painting Prize exhibition at the Walker Art Gallery in Liverpool, and most recently with a solo show at Serena Morton Gallery in London. Simon was recently named one of Saatchi Art’s 21 Artists to Collect in 2021.

I am an abstract painter/artist based in the historic Porthmeor Studios, St Ives in Cornwall, England. These studios are best known for the incredible number of internationally significant artists who have been based there including Julius Olsson, Stanhope Forbes, Frances Hodgkins, Ben Nicholson, Patrick Henry, Francis Bacon, Terry Frost, Roger Hilton, Wilhelmina Barns-Graham, and John Wells.

I studied in Fine Art painting but have also had a parallel working life in film and TV production as a Animatronic Designer. Firstly, for the satirical puppet show Spitting Image, and then Jim Henson’s Creature Shop, and over time numerous films from Harry Potter to Star Wars and many more.

I’m interested in making paintings filled with a dynamic energy that flows. The canvas for me is a space for spontaneity, playfulness, and chance alignments to occur: my own uncharted dialogue between the needs of the subconscious and conscious mind, where the outcome is not fully known.

Ultimately, my desire is to reflect back to the viewer something of the world we live in, a time of visual bombardment from advertising, packaging, graffiti, and digital technology. Surprise and order are explored via a variety of gestural marks and methods of application. Colour is intuitive and reactive, and materials are chosen for their inherent graphic qualities, from an opaque flatness of tone to a more beguiling and illusionary spatial mark making which feels new and different. These subsequent layers are built upon until some kind of self-determined equilibrium occurs. Chevalier, as an example, can be traced to a fascination with childhood comic annuals, visually arresting stories that burned deep into my sense of aesthetic, half remembered and subsequently fused with other stimulus from the the visual soup of our time.

I tend to start paintings on the floor, applying very liquid marks with large brushes—it’s a way to quickly develop a structure, and then make choices as to what areas to consolidate or keep in a state of flux. Over time and continual layering of thinly applied paint, a structure [or] direction will form. I change application methods often, using a variety of different tools in order to break up the recognizable signature of marks. I’m drawn to challenging a viewer’s visual perception as to how something is done, so I tend to combine lots of materials, from acrylic inks to Alkyd oil paint. Paintings are finished when I feel I can no longer add to the image.

I have always admired the work of Albert Irvin RA, an artist who made large-scale gestural paintings—a great colourist, I have always felt a sense of excitement standing in front of his work. As a child I grew up watching Saturday morning cartoons, so the work of Chuck Jones, the American animated film maker and cartoonist, has had a long-lasting effect on my sense of aesthetic.

My father was an artist, so I grew up with paintings everywhere around the house. There was always a great deal of encouragement for the arts. Making work, whether 2D or 3D, has always felt a natural response, it’s my way to communicate. 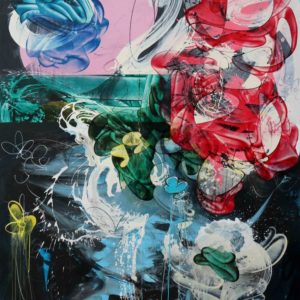 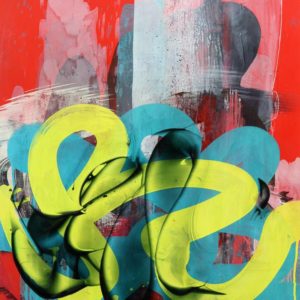 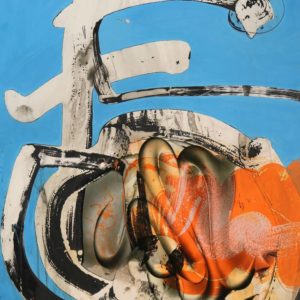 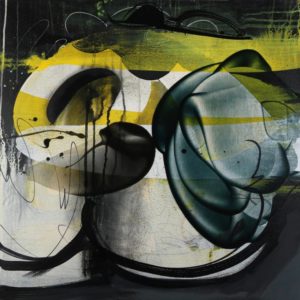 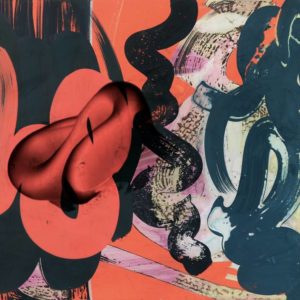