Joshua Evans-Hooper likens his paintings to daydreams–fantastic explorations of images that stray from reality. Though many of his subjects are sourced from found imagery, he obscures and distorts these figures, adding layers of color and organic shapes. Joshua also embraces digital practices, as he deconstructs film stills, works with Photoshop to construct compositions, and uses a Google algorithm to determine a color palette for a given work. His final portraits are fragmented and abstracted, inviting the viewer into escape from reality.

Joshua lives and works in London. He received a BFA with first class honors from Kingston University and a Higher National Certificate in Fine Art from Kensington College. His works have been exhibited at the Islington Arts Factory summer salon as well as at the Stanley Picker Gallery in England.

The intention of my painting is to transcend the viewer into a dream-like landscape, indicative of film. This fantasy landscape entrenched with figures is an intangible site, a place not quite rooted in reality. The work is a materialization of a daydream, redolent of escapism. It is a mental diversion exemplified by recreation and re-screening.

I work thinly over canvas with diluted acrylic paint and watercolor pencil, and then use deformed fields of color to similarly deface and obscure human figures and landscapes. The painting is overworked, and spaces on the canvas are left exposed to reinforce this dialectic notion. The brush strokes often range from gestural to contained marks and from facets of bold pigment to saturated pastel-like colors.

I use color themes from a Google algorithm, which finds images similar to the ones I upload. I upload photographs of lens flares or expired film and look for unusual gradients and juxtapositions of color in these stolen/found photographs. When working from photographic sources, the tendency is to use restraint when referring to the photo, so as not to produce a concrete location. Instead, I use partial ephemeral memories to obtain an elusive and indefinable scene, a space between places.

Digital technology is a component throughout the painting, such as the deconstruction of film stills and the construction of composition through Photoshop. The construction of the painting’s identity is embodied by collage. I describe collage as a collision of rehearsed narratives, images are thrown and confronted into a thematic assembly. When working from photographic collage, the painting becomes a recycled symbolic plane.

Don’t be cheap on paint and loosen up!

I listen to a lot of grime and rap. I can’t work in silence.

Works for sale by Joshua Evans-Hooper 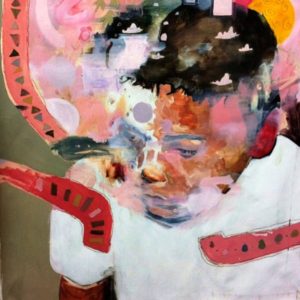 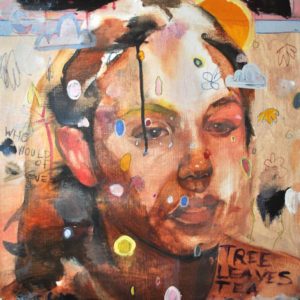 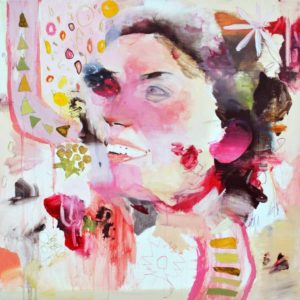 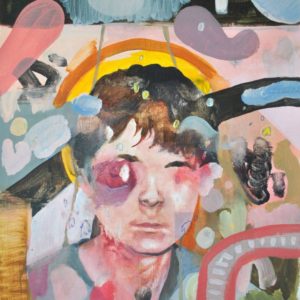 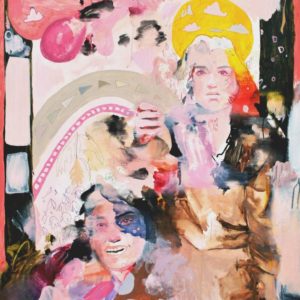