Michael Polakowski is a Detroit based artist and curators whose paintings radiate a light and color that create a futuristic effect that challenge the very way we expect to see a  painting. We asked Michael about his work, being an artist in Detroit and how his practice has evolved over the last six months.

Tell us a bit about yourself,

I am a fine art painter currently living and working in Detroit, MI. My work features observations of my life in the Midwest through surreal and absurdist paintings. My visual language is a mashup of textures, lush patterns, and vibrant colors communicated through the medium of acrylic painting. 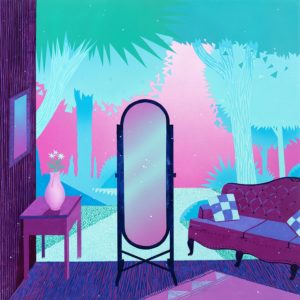 All Intents and Purposes, Michael Polakowski

Currently I am interested in documenting small moments of reflection and calm. This has been a consistent theme in my work for years but the solitude afforded to me by the pandemic has pushed my work further in that direction.

The art scene in Detroit right now is pretty exciting to be around! There are a lot of talented people who are making a name for themselves on their own terms and putting out great work. I’m curating a show right now with some of my favorite Detroit painters and plan on exhibiting it in an artist run space. That’s the type of thing that excites me about being here, having access to wickedly talented people and the community spaces to share their work in.

Oh man, that’s a lot! I have a three person show next year at Playground Detroit that is a pretty big focus for me. With that body of work I’m pushing what is possible with maximalism and really feeding off of what my work will look like next to the other two artists (Jack Joyce and Sheila Nicolin). I’m also following up on my online exhibition through 1xRun with a series of works on paper. That body of work is all about simplicity and drawing as an act of meditation. Besides painting, like I said I am curating a ten-artist group show in Detroit at KO Studio gallery. It is heavily influenced by the Chicago Imagists and I can’t wait to see what the artists produce for it. 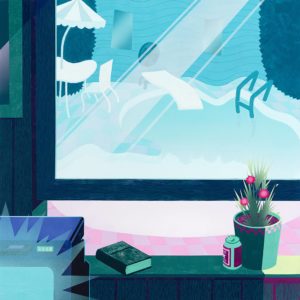 For a while I was working out of my home studio and had to simplify my process a ton! Michigan had a pretty strict stay at home order so I just treated it like a residency. I did nothing but paint for three months and explored a lot of new subject matter, including a renewed interest in figural work. Before the pandemic my work was sparsely populated with figures and it took almost complete seclusion to make me start representing people again. I became really interested in appropriating images from old fashion and advertising photography. They all just seem so surreal if you really dissect it; often times single figures are depicted in overtly pristine environments. I don’t know, there is just something so bizarre about all of that and it fits right in with my work. 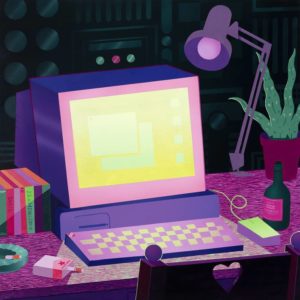 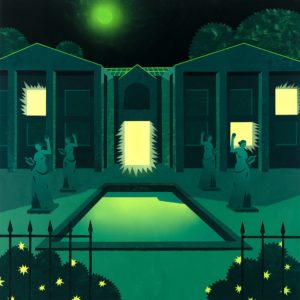