Often described as an artist “beyond ‘isms,’” Gerhard Richter has produced a baffling array of art over the past six decades. A painter whose oeuvre includes photorealist portraits, non-representational abstracts and even sculpture and performance art can be difficult to explain. In many ways, that is the point of Gerhard Richter’s approach to art making—he cannot and does not want to be pinned to a single medium, style, or movement, and in that ethos lies the reason why he is considered one of (if not the) most important living painters.

To understand the radicalism of Gerhard Richter, you first have to understand the state of painting in the 1960s—essentially, painting was dead, as many critics proclaimed upon seeing the graphic works of Andy Warhol and the blank canvases of Ad Reinhardt. Without a doubt, painting as a craft and means of faithful representation or inner expression had been forsaken for the conceptual potential of art, spurring many artists to abandon painting altogether. It was onto this scene that Richter emerged as a young German artist who met the new demands of the art world without giving up the brush. Instead, Richter used the paint medium to analytically explore its own traditions, boundaries, and physical properties independently of any meaning or style that could be imposed upon it.

Born in Dresden on February 9th, 1932, Richter grew up at the height of Nazi Germany. His family lived in the village of Waltersdorf during World War II, which became part of the German Democratic Republic after the Potsdam agreement of 1945. In 1951, Richter returned to the rubble-strewn city of Dresden to study art at the Dresden Academy, which, under Soviet rule, promoted socialist realist painting and banned the study of modern art, which was decried as Western bourgeois decadence.

Upon graduating in 1956, Richter pursued a career as a muralist, working in the style of socialist realism, which emphasized an aesthetic and ideological ideal of healthy, muscular bodies, and joyful citizens liberated from fascism and unencumbered by the capitalist decadence that plagued Western Europe. Feeling increasingly constrained by Soviet dictums on art, Richter determined to flee the GDR for West Germany after encountering the works of Jackson Pollock at a 1959 exhibition. In West Germany, he pursued his studies again at the Düsseldorf Academy, which was largely considered to be at the forefront of the art world in the 1960s. There, Richter began looking to mass media for artistic inspiration, a far cry from the academic style in which he was trained at Dresden.

Newspaper clippings and personal photos became Richter’s primary source material for his photo paintings, meticulous, realistic renderings he created by projecting and tracing a photograph onto a canvas. In these works, Richter emulated the mechanisms of photography with his signature “blur” effect created by feathering wet paint to emulate a camera out of focus. Richter’s attraction to photos stood in contrast to the artistic aims of Abstract Expressionist painters, who used paint for its expressive potential. Instead, Richter aimed to make formalist paintings devoid of style or expression.

As he explained in his writings from 1964-1965, “When I paint from a photograph, conscious thinking is eliminated. The photograph is the most perfect picture. It does not change; it is absolute, and therefore autonomous, unconditional, devoid of style.” In one of his most famous portraits, Betty (1988), Richter’s out-of-focus daughter turns away from the viewer, suggesting that the physical potential of paint, rather than subject matter, is the focus of Richter’s work.

In 1966, Richter painted his first color charts, grids of color swatches described by the artist as “copies of paint sample cards.” Based on color wheel combinations and industrial paint mixing charts, Richter’s color grids were produced by rote action devoid of any artistic intentionality, apart from the scale of the work itself.

Richter’s color charts gave way to his most prolific and recognizable body of work, his abstracts. In 1972, Richter began his series of Vermalung, or “Inpaintings,” abstract works that began as representational paintings, which Richter would then paint over and distort to such a degree that their original subject matter was lost. Using large squeegees to sweep over his paintings, Gerhard explores the physical, gestural capacity of paint, sans expression.

By the 1980s, painting saw a resurgence in the form of neo-expressionism with gestural, textured, and even figurative works by artists ranging from Jean-Michel Basquiat to Philip Guston. Richter’s work, however, was distinct from this trend for its emphasis on the physical qualities of paint itself devoid of commitments to style or subject matter. His series of candle paintings cemented his outsider status and became some of his most iconic works: minimal settings, the use of the Renaissance chiaroscuro technique to emphasize shadow, and the benign subject matter in an era of expressive resurgence affirmed that Richter’s allegiance and aesthetic interests lie with paint, and paint alone.

Richter’s dual training in East and West Germany and his peculiar upbringing under Nazi rule undoubtedly informed his nomadic approach to art making, which has yielded an unprecedented and diverse body of work that has revived the potential of paint.

See More Artworks in the Inspired by Gerhard Richter Collection 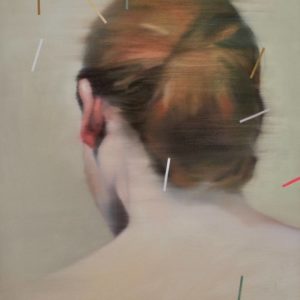 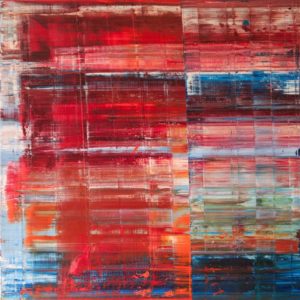 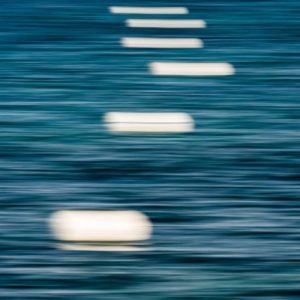 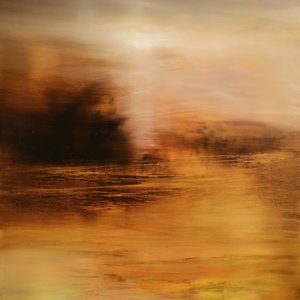 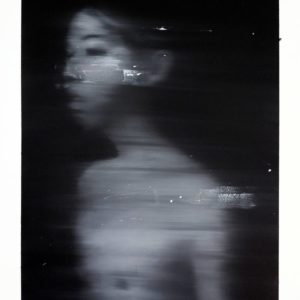