Andy Allen is an emerging artist living and working in Nottinghamshire, United Kingdom. He received his BFA from the Loughborough University School of Art and Design and earned a foundation diploma in Art and Design.

Andy explores the traditional process of oil painting and its relationship to digital technology, architecture, and design. While he focuses on painterly elements of composition, color, and materiality, he also experiments with digital techniques, culling compositions from an archive of digital images. His works juxtapose angular architectural structures with vivid, organic natural settings, resulting in scenes that both disquiet and intrigue the viewer.

Andy has participated in international art fairs and exhibitions throughout the UK. His works have been featured in the London Art Fair (Islington) and the Affordable Art Fair in New York. Most recently, Andy had a solo exhibition at 60 Threadneedle Street in London.

My process based practice has a dialogue between digital technology and the tradition of oil painting. The compositions come from a huge and constantly expanding image archive. These are then digitally manipulated, before making the transition into paint. During the painting process, the source images are changed and modified, and are at some points even completely abandoned to allow the painting to develop independently. Through several layers, the paintings are built up and deconstructed until I find the image. Some are fluid, loose, and immediate, and some are labored and fought with.

I see my work as a blend of fiction and reality, more akin to a memory or an imagined space.  The simple compositions invite the viewer into a silent world where the tension between geometric structures and the rhythms of nature create a disquieting and less familiar environment. Transformed by color and mark, they are loaded with semiotic triggers to control and engage with the viewer.

I think at heart I’m a colorist; I am still trapped in that first art lesson at school, where you make a color wheel and learn about complementary color and harmonies. I am always exploring the language of color.

A fellow painter once told me “Just get on with it!” Trust in yourself.

I also remember at university, during a tutorial, my lecturer pointed to a brush hair stuck to my canvas and said ‘Is this intentional?’ This changed the way I thought about painting. The brush hair was not intentional. However, it did have meaning–it was evidence of process and human touch. The painting is itself a record of the dialogue between canvas and painter. Over analyzing tiny (and even irrelevant) things makes you constantly question your work. It pushes your understanding and makes you continually develop, adapt, and ultimately understand yourself as an artist and your practice.

I have never really considered it before but now that I think, music has a big role in my practice. When painting, I will always have something on in the background, whether its loud, abrasive metal or some kind of BBC 4 documentary or audio book. The different rhythms and time signatures affect my work and the way in which I approach decision-making. By considering and controlling what I listen to, I can influence my mood and energy.

I love gypsy music. The ridiculous lyrics and massive, nonstop energy force me to dance around and really loosen up. It is conducive to enable quick decision-making and fluid marks. On the other hand, a quiet contemplative audio book draws me into the narrative and detaches me from my practice, allowing my brain to wonder.

When working on Descending I got to a stage with it where it was not working and I fell out with it… big time! A song came on: Descending (the paintings namesake) by Lamb of God. I pulled the painting off the wall and began pouring paint all over it to deconstruct it. This momentary decision, influenced by music, was a crucial step in the painting’s development. I find myself making decisions every time I fire up my computer as to “what is it that I want from this session in the studio?” I can’t ignore the power music has over my practice, even if I’m not fully paying attention.

Tough one. Always wanted to run my hands across a massive, gnarly Anselm Kiefer painting but it wouldn’t fit in the apartment so… I would probably say John Singer Sargent’s portrait of Lady Agnew of Lochnaw. Unusual choice, but I remember being completely gripped by this painting when I saw it in Edinburgh.

I don’t have as much time for reading as I would like, but when I get a chance I generally flit between art theory and fantasy. I love the escapism, anything that immerses you in an imaginary world. For me, a book with a map at the front is a good start.

Works for Sale by Andy Allen 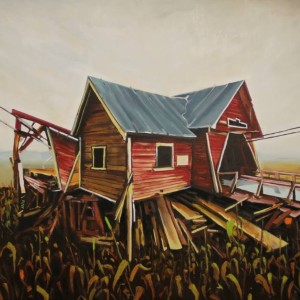 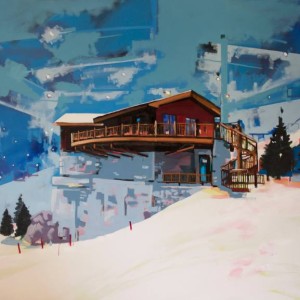 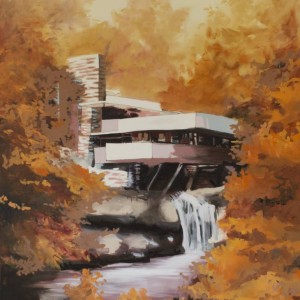 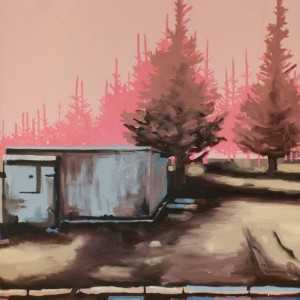 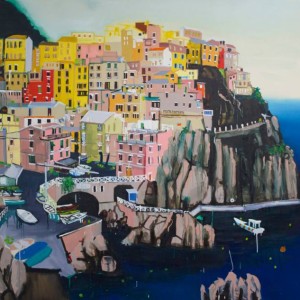