Francesca Fini is an interdisciplinary artist focused on experimental cinema, digital animation, new media, installation, and performance art. Her live performance art examines the relationship between public representation and private life. Primarily interested in video and live art, her mediums include a mix of traditional media, lo-fi technology, interaction design devices, generative audio, and video. Francesca has exhibited in nearly 100 exhibitions around the world from Europe to South America, including solo shows, group shows and biennales. 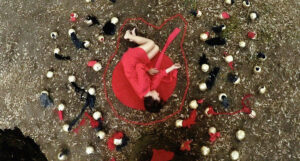 It’s great to have you, Francesca! To start, can you tell us a bit about yourself as an artist?

I’m mainly a filmmaker, I did many experimental films during my 15 years career so far.

In my films I use performance art language mixed with digital formats and technologies, in a contemporary attempt to find a new approach to the action of the body in the here and now, so to speak. In my films I even mix 2d and 3d animations with performance art! As a film maker doing these crazy things I’m pretty successful. I’ve been in many international residencies and festivals.

The image above is a still from one of my films, Ofelia non annega (Ophelia did not drown). It was listed by Italian legendary experimental films critic Adriano Aprà (a guy who wrote massively about Rosselini among others) as one of the best Italian films of the last 20 years

The concept of this film is that it consists completely (90 minutes) of performance art pieces in which I try to find a different ending for poor Ophelia, through art. In the end, my heroin just decides not to fulfill her romantic destiny and survives in the world as a normal person.

Feminism is also a very important aspect of my work.

Your performance art focuses heavily on outer representation vs. private lives. Can you tell us a bit more about that?

This piece, for example, is pretty clear about the idea of a complete disconnection between our inner self and our public image. It is a live performance called Fair and Lost. I wear electrodes on stage creating shocks on my body and transforming my data into visuals. The shocks are also creating a strange not controllable movement of my hands and in this condition I try to put make up on my face. 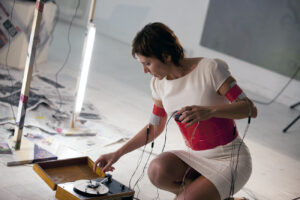 I use a lot of technology and social media, especially in my live pieces, to represent our ‘mixed-media’ daily lives. As a live performance artist on stage (generally an art gallery or a festival) I use a lot of technology. I ‘augment’ my body with many devices (sensors, computer vision, augmented reality) in order to create immersive audiovisual experiences whose focus is always the body – my body.

For example, I wear sensors that transform my biometric data into live sound, or I perform in front of a camera that detects my position in space generating real-time visuals… It sounds complex and a bit ‘cyber-punk’ but the complexity of my live pieces, the redundant technology, is a way to represent our everyday life: we are all connected, all the time. We are all ‘augmented’ by our ‘friendly’ devices that are now part of our bodies (the smart-phone, just to make an example, is really an extension of our brain). I love to create a synesthetic relation between the virtual and the real, between the digital and the physical, in order to create a discourse about our present times.

This is a piece called ‘The Paperwall’ where I draw for weeks everyday on a board on the floor of 6x6meters with the help of small hacked robots.

Do you draw on your experience as a filmmaker in your performance and video art and vice versa? How do the skills and influences overlap?

The filming experience is very important because it teaches you that you ALWAYS need some kind of story telling. As a filmmaker you never start from a concept but always from an action. I love cinematic language, I love to write settings and situations, to hide a little story even in the smallest detail: this is cinema! In my TOA pieces, which are all animated, you can find these small stories.

I approached this NFT project the way I approach any new project: In the mpeg NFTs, that are a bit longer, I tried to think about an action that could be performed by my avatar (or even by the traits) in the given time (the fixed duration of the piece) and space (in this case, the square digital format). I treated Vincent as one of my performers! The shorter gifs are closer to traditional NFTs though. I found out that I like making gifs – it’s a very complex and challenging language. 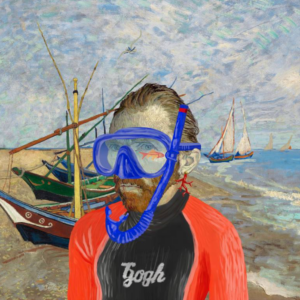 So if I look for a storyline in this piece, I would say that the Van Gogh character went snorkeling and his goggles opened up (hence, the fish). Could that be considered a storyline or is there more?

Actually you can imagine many different stories starting from this image. In Italy, there’s an expression: to be a ‘fish out of water’. It describes a situation where you feel that you are different from the masses and don’t feel comfortable with the world around you.

I guess this is the idea of this piece. The coral is part of this strange suit of an out-of-the-water marine Vincent approaching the outer world.

Very relevant to Van Gogh! So in effect, you took a 2D image and created a 3D character and story. There is movement within the the still image.

Exactly. The technique that I used to produce my TOA NFTs is also very performative because it has a lot to do with traditional puppetry: I use a cut-out animation technique, which means that I literally and strategically cut out the avatar body into digital pieces and then reassemble them around a system of digital bones, in a brand new 2D or 3D space with depth. Next, I animated my avatars in this new digital space, following the story that I conceived for them. A time-consuming but very funny and rewarding process.

This was the first time that I created a project based on ‘traits’, but I really loved it and felt comfortable because reminded me the iconography of saints in traditional art and this is also very close to performance art.

What would you say was the most enjoyable and most challenging part of working on this project?

The challenging part was for sure the square canvas format because as a filmmaker, I always work with landscape. It’s conceptually a small revolution because instead of focusing on the person in the context, you really focus on the character alone. So in the beginning, it was a little claustrophobic and also challenging because you change the perspective of the story telling.

The rewarding part was being with so many great artists.